Introducing the class of 2011 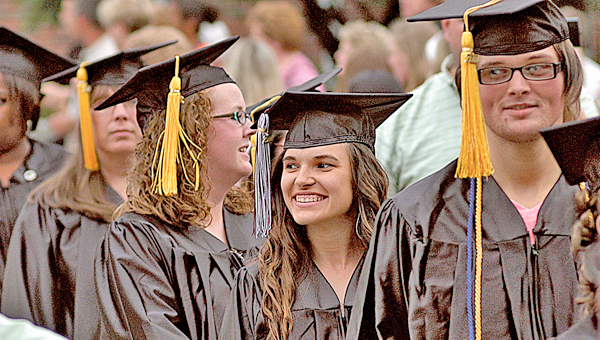 Rumbling thunder and the threat of rain didn’t keep family and friends from supporting their graduates at Ohio University Southern Friday evening.

More than an hour and a half before the ceremony began, people were filing into Shaffer Courtyard to get prime seats for the commencement.

“It’s a day that makes one recognize all the promise… all the young people, all the non-traditional students who have set a goal, reached it, and are now ready for new adventures,” said Dean Bill Willan before the ceremony.

Willan also said about 50 to 60 percent of the students at OUS are non-traditional, meaning they are not right out of high school.

“They recognized that they needed to take another step in their lives and have done so,” he said. “We are just thrilled with the accomplishments and wish them the best. We believe that education transforms lives.”

Judge Charles Cooper gave the introduction. Forty-six students graduated in Ohio University Southern’s first commencement in 1981, he said. This year, 368 graduates walked across the stage to get their diploma. Eight were graduate students receiving their master’s degrees, 185 received a bachelor’s degrees and 177 received associate’s degrees. Almost one third of the graduates were receiving associate’s or bachelor’s degrees in nursing.

Willan said in his address to the graduates that with the support of parents, teachers and other, the graduates were able to take this step.

“And (they) have felt that sense of responsibility to return that support to their families and community have taken the many steps that have brought them to this place of honor.”

Picking up the pieces

More than 4,000 graduates participated in Ohio University’s commencement ceremonies Friday and Saturday in Athens. Shawn Stewart, 29, was one of them, receiving his master’s degree in public administration.

But Stewart might not have walked across that stage had it not been for a little, what he calls, northern hospitality.

“After losing everything you have, and not really having anything, I didn’t want to find ourselves in that predicament again,” Stewart said of his family. “So I decided, that education would probably be my best bet.”

From New Orleans, Stewart, his wife Nicole and their three young children, Eddie, Bryant and Briant-e, were evacuated from their home when Hurricane Katrina made landfall in August 2005.

In the midst of the chaos, he said, they sought help from one of the many shelters set up for displaced families.

“There were a bunch of communities offering relocation for families,” Stewart said. “My wife went to one of the help shelters and a fax came across for Ironton, Ohio. She brought it back home to where we were and I was like, ‘Ironton? Where is that?’”

The Stewarts arrived in Ironton on Sept. 4, 2005 and his family with set up with an apartment with help from the CAO.

“People talk about southern hospitality, but coming to Ironton, it’s northern hospitality,” Stewart said. “There are so many people that have impacted our lives since we’ve been here, especially at OUS.”

“When I came here I was terrified,” Stewart said. “John just looked at me and smiled, ‘Don’t worry about it. We’re going to get everything taken care of.’ And I never forgot that.”

Stewart went on to complete an associate’s degree in law enforcement in 2007, a bachelor’s degree in criminal justice in 2008, and most recently his master’s degree in public administration.

Not wasting any time, Stewart is on the hunt for jobs.

“It’s tough, but I’ve got a lot of leads,” he said. “Something will come along soon. I’m also hoping to get a chance to teacher here at OU as an adjunct instructor.”

His old home in New Orleans is still abandoned as has the spray paint FEMA left behind on its door, but Stewart said he family has moved on and Katrina is a distant memory.

“It’s there, there are some scars, you could say, because that’s your home and you don’t want that to happen to anybody. But life moves on, you know.”

Lee Anne Mullens had a hard time holding back tears as she spoke about her son on graduation day.

“I never thought that we would not be here,” she said.

Aaron Stumbo, 23, graduated from Ohio University Southern with a bachelor’s degree in health services administration, an his mother never doubted he could do it because of his take-charge attitude.

“From the very beginning, he has taken charge of his illness and a lot of the reason he is where he is, is because of his attitude,” Mullens said.

Around the time Aaron graduated from Rock Hill High School in 2006, he was diagnosed with Hodgkin’s lymphoma, a type of cancer that is common in older teenagers and young adults and is treated with chemotherapy and radiation.

Mullens said none of that has stopped him from going after his degree and also from pursuing kung fu and jujitsu. Aaron only missed one quarter at OUS because of treatments and he has been in remission for about two years.

Now, standing in the courtyard at OUS on graduation night with his girlfriend, Nicole Heighton, also a graduate, Aaron said a big weight has been lifted off his shoulders.

“I did a 400-hour internship and three classes so I had a pretty full load this quarter,” he said.

Even through all the treatments and classes, Aaron said the past five years have flown by.

And Aaron is still going towards yet another degree in long-term care and will also pursue a master’s degree in business.

“I very much look forward to his future,” Mullens said. “I think he’s well on his way. He’s done well in college despite all off the obstacles that he’s faced.”

IHS singers to perform at state conference in November

The Ironton High School Varsity Singers have been selected to perform this fall at an Ohio School Board conference in... read more