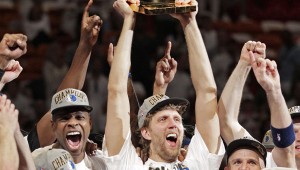 Dirk Nowitzki of the Mavericks holds the championship trophy after defeating the Heat during Game 6 of the NBA Finals at the AmericanAirlines Arena in Miami, Florida, Sunday, June 12, 2011. The Dallas Mavericks defeated the Miami Heat, 105-95. (MCT Direct Photos)

MIAMI (AP) — For Dirk Nowitzki, the resume is complete. He’s an NBA champion.

For LeBron James, the agonizing wait continues for at least one more year.

Avenging what happened five years ago in perfect turnabout style, the Dallas Mavericks won their first NBA title by winning Game 6 of these finals in Miami 105-95 on Sunday night — celebrating on the Heat’s home floor, just as Dwyane Wade and his team did to them in the 2006 title series.

The Mavericks won four of the series’ last five games, a turnabout that could not have been sweeter after seeing the Heat celebrate their first title in Dallas after Game 6 of the 2006 finals.

James did not. Not even close, and a year unlike any other ended they way they all have so far — with him still waiting for an NBA title.

He scored 21 points for Miami, shook a few hands afterward, and departed before most of the Mavs tugged on their championship hats and T-shirts. Chris Bosh had 19, Mario Chalmers 18 and Dwyane Wade 17 for the Heat.

“We worked so hard and so long for it,” Nowitzki said. “The team has had an unbelievable ride.”

So did the Heat. Unlike Dallas, theirs wasn’t a joyride.

“It goes without saying,” Heat coach Erik Spoelstra said. “You’re never really prepared for a moment like this. … Neither team deserved this championship more than the other, but Dallas earned it.”

Make no mistake: Miami lost the finals, but the blame will be directed at James. Even he knew that after the way he left Cleveland with “The Decision” and all the animus that generated not just in Ohio but around the entire league, the only way he could silence some critics was with a title.

Instead, he got more criticism — and a thinly veiled jab from his former owner with the Cavaliers, Dan Gilbert, who reveled in the moment on Twitter.

“Mavs NEVER stopped & now entire franchise gets rings,” Gilbert wrote. “Old Lesson for all: There are NO SHORTCUTS. NONE.”

Mavs coach Rick Carlisle joined a highly elite group, those with NBA titles as both a player and a head coach. Only 10 other men are on that list, including the presumably retired-for-good Phil Jackson, one of Carlisle’s mentors in K.C. Jones, and Heat President Pat Riley — who led Miami past Dallas in 2006, and was the mastermind of what the Heat did last summer by getting James, Wade and Bosh on the same team with an eye on becoming a dynasty.

But even after 72 wins this season, including playoffs, the Heat lost the last game. And that means this year was a disappointment — except to just about everyone else in the NBA, or so it would seem.

“This is a true team,” Carlisle said. “This is an old bunch. We don’t run fast or jump high. These guys had each other’s backs. We played the right way. We trusted the pass. This is a phenomenal thing for the city of Dallas.”

Hating the Heat became the NBA’s craze this season, and the team knew it had no shortage of critics, everyone from Cleveland (where “Cavs for Mavs” shirts were popular during these finals) to Chicago (the city James and Wade both flirted with last summer) and just about every place in between lining up to take shots at Miami.

Given their newfound popularity, meet the new America’s Team.

Sorry, Cowboys — your long-held moniker might have to be ceded to your city’s NBA club. When it was over, Mavs owner Mark Cuban ran onto the court to hug Carlisle, then punched the air and whooped.

When the Mavericks took a 2-0 lead in Dallas during the ’06 finals, plans for their victory parade were announced. The Mavs didn’t win another game in that series.

Now, that parade will finally happen. And when it’s over, then the league’s uncertainty will truly begin. Labor strife likely awaits, and although more talks geared toward movement on a new deal are scheduled for this week, both owners and players are bracing for a lockout to begin once the current collective bargaining agreement expires June 30.

What happens with the next deal may affect the Heat more than anyone. Some owners will insist on a hard cap, rolled-back salaries and, potentially, trying to bust some current deals — which could break up the Big 3 before get another chance to win a title together.

A gloomy end to the season may bring an even gloomier offseason for Miami.

They didn’t pass. So therefore, it wasn’t all worth it. Except, of course, from the Dallas perspective.

Miami had chances to take command and wasted them all. The Heat missed 13 of their 33 free throws, let the Mavericks score 27 points off turnovers and simply could not get a rebound in the final minutes.

Plus, after James got off to such a fast start, he had two points in the final 19-plus minutes of the half.

James didn’t score in the second half until a layup with 1:49 remained in the third — his first field-goal attempt since 1:05 remained in the half. Kidd made a 3-pointer late in the period, pushing the Dallas lead to 79-71, and it seemed like the only people standing in the arena were the players, referees, Cuban and a few guys around the Dallas bench.

Dallas took control in the second half after some wild back-and-forths in the opening two quarters. Miami took its last lead of the game — the season — just 64 seconds into the second half, lost it 16 seconds later and chased the Mavericks the rest of the way.

They never caught them.

Jason Kidd, at 38 years old, got his first championship. Nowitzki got his at 32, Terry at 33. They were featured on the video screen in their building in Dallas during this series on what seemed like a constant loop, each posing with the NBA trophy and looking longingly at it, standing mere inches from it, as if to say “so close, yet so far away.”

Nowitzki sealed it with 2:27 left, hitting a jumper near the Miami bench to put Dallas up 99-89, and some fans actually began leaving. Nowitzki walked to the Mavs’ side slowly, right fist clenched and aloft.

He knew it. Everyone did. Heat coach Erik Spoelstra implored his team to foul in the final minute, and even then, they couldn’t catch the Mavericks.

“All those unique individual stories is what propelled us to this victory,” Terry said.

Dallas expected a big early push from Miami, and the Mavs’ suspicions were proved correct. James made his first four shots, and the Heat raced out to a 20-11 lead.

It was erased — and then some — quickly, as soon as Dallas went to the zone defense that befuddled Miami again.

Dallas needed 5 1/2 minutes to rip off a 21-4 run, making 9 of 12 shots during the stretch. And much of that came with Nowitzki on the bench with two fouls, the first time he’s been whistled for more than one in the opening quarter of a playoff game this season.

The Mavs were off and running. DeShawn Stevenson made a pair of 3-pointers within a span of 24 seconds to give Dallas a 40-28 lead with 9:42 left in the half. Dallas turned Miami’s first six turnovers into 14 points, and the hundreds of blue-clad Mavs fans stood and roared, with Cuban waving his arms as if to lead the cheers from behind his team’s bench.

Things turned quickly and got heated for good measure.

Miami scored the next 14 points to reclaim the lead at 42-40, a streak snapped only after Stevenson, Udonis Haslem and Chalmers got technicals with 6:25 left in the half after a midcourt mini-melee with mostly amounted to some words and a couple of shoves.

“A player will not automatically be suspended for leaving the bench if he has already left the bench because a timeout was called,” the NBA announced later in the game. “However, we need to review the circumstances of this particular incident, which we will do, after the game.”

So the NBA will watch replays. The Heat, they probably won’t — not for a long while.

It was 81-72 entering the fourth, after Ian Mahinmi made a foul-line jumper as time expired in the third, just his third basket of the entire series.

None were bigger. The Mavs could taste a title.

Of the principal characters from the 2006 series, only Cuban, Nowitzki and Terry remain from the Mavericks’ side, and for them, the beginning of this championship celebration seemed sweeter than even they could have imagined. Terry won’t have to get his tattoo — the one of the NBA championship trophy — removed, which he vowed to have done if Miami won this series. Nowitzki will never be in the conversation of ’Best player without a title’ again.

James is clearly the one with that most-unwanted label now.

NOTES: Carlisle improved to 11-3 as a coach with a chance to close out an opponent. … James got a 21-minute rest in the second quarter in real time, thanks to that midcourt dustup and the referees taking several minutes to look at replays before doling out the technicals. … Marc Anthony sang the national anthem, then took a courtside seat near the Heat bench.

MIAMI (AP) — Mark Cuban’s zipped lips resulted in a championship, and when it was time for his old nemesis... read more