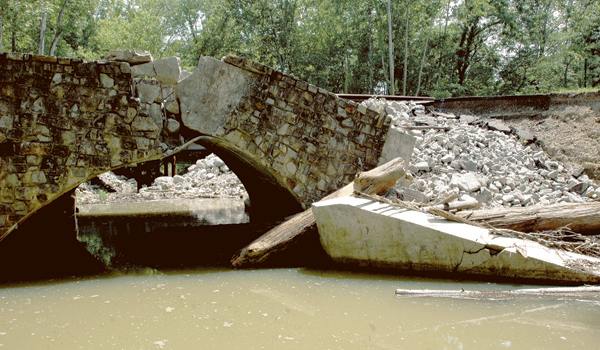 The destroyed bridge at Lake Vesuvius is still at the scene.

PEDRO — By this time next year there should be a new bridge in an old spot at the entrance of Lake Vesuvius.

Massive rains in July 2010 washed out the historic bridge at the lake’s recreation area on County Road 29. In late fall a temporary steel structure was put up downstream of the location of the original bridge to accommodate area residents who use the road as a major thoroughfare.

Now design work for the replacement is complete and officials expect to bid out the project in the next month a half, according to Tim Slone at the Wayne National Forest Ironton District. 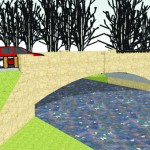 An architectural sketch shows the new design of the bridge that is expected to be in place by next spring.

“We are hoping to have it open by next spring,” Slone said. “It will give a quicker ingress and egress. The new bridge will be in the same footprint as the old one”

The original stone bridge was built in the 1930s as a Civilian Conservation Corps project. That bridge was widened in 1990 as part of a long-term major construction project on County Road 29 that began in the 1980s.

“It will look very similar to the prior bridge work, the same type of stone work, but with one arch instead of two,” County Engineer Doug Cade said.

The project is a collaboration between the county engineer’s office and the national forest service since it is a county road inside Wayne National. Design work was done by Chris Wilson with the forest service.

The project is expected to cost between a half million and a million dollars with 100 percent of the funding to come from the Federal Highway Administration.

There wasn’t enough tissue left on her hands to get even a single fingerprint. All that authorities knew for certain... read more