Damn Yankees! Big first inning too much as Reds fall 5-3 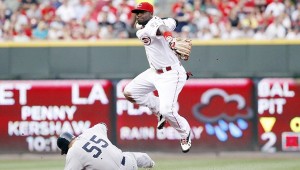 CINCINNATI — Left-hander Travis Wood tried to stay calm while facing the Yankees for the first time in his career in front of a capacity crowd. It took him an inning to settle in.

By then, it was too late.

Alex Rodriguez started New York’s four-run first inning with an RBI single, and rookie Ivan Nova held down the NL’s most prolific offense for eight innings Monday night, leading the Yankees to a 5-3 victory over the Cincinnati Reds.

New York started fast against Wood (5-5), who made an unexpected start. Originally scheduled to pitch on Tuesday, he was moved up a day when Johnny Cueto showed up with a stiff neck.

“He was a little pumped up in the first,” manager Dusty Baker said. “A lot of his pitches were waist-high. He settled down after that, and we had some action in the first inning, but we only got one run out of it, and that was our only chance until the ninth.”

Nova (7-4) made the early lead stand up by using his slider and changeup more than he has all season. The rookie won his third straight start, allowing a run and four singles without walking a batter. Fifteen of Cincinnati’s outs came off ground balls.

The AL’s top bullpen allowed the Reds to rally in the ninth. Brandon Phillips led off with a single and Boone Logan hit Joey Votto with none out. Mariano Rivera came on and gave up Scott Rolen’s RBI single and Chris Heisey’s run-scoring forceout before fanning pinch-hitter Edgar Renteria for his 18th save in 21 chances.

Rivera has converted his last 21 chances against the NL and has a record 65 career interleague saves.

“I feel like we’re the comeback kids,” Phillips said. “When I got that base hit, I was thinking, ’Here we go.’ We just came up short. There’s something about that ninth inning. It’s like we get our second wind.”

The Reds lead the NL in runs, but have struggled lately. They scored four runs — all off homers — while dropping two of three games against Toronto over the weekend.

“We’re having a hard time getting batters on base — in any inning — and getting their pitchers into a stretch right away,” Baker said. “We’ve got to come up with a way to get one or two guys on right away.”

Interleague play has been a big problem for the defending NL Central champions, who are 1-6 against the American League.

The Yankees are visiting for the first time since 2003, when they had an unexpected moment in franchise history at Great American Ball Park. Late owner George Steinbrenner decided to make Derek Jeter the team’s 11th captain during the series, informing the shortstop by phone.

Jeter was potentially on pace for another historic moment in Cincinnati, but a strained calf landed him on the disabled list last week. Jeter is six shy of becoming the first Yankee with 3,000 career hits.

The Yankees lead the majors in homers and score a higher percentage of runs off the homer than any other team. That powerful offense would seem to be a perfect fit at Great American, one of the majors’ most homer-friendly places.

Instead, New York won by keeping it simple.

The Yankees put together four singles and Robinson Cano had an RBI double in the first inning to help build a 4-0 lead against Wood, who needed 33 pitches to get three outs. Rodriguez’s single drove home the first run and gave him 178 career interleague RBIs, the most by any player.

After Cano’s hit, a large group of NY fans in the capacity crowd of 41,173 started chanting: “Let’s Go Yankees!”

Wood, facing the Yankees for the first time, gave up only one more hit through the seventh.

“With the Yankees coming in, I tried to be as calm as possible and treat it like any other game,” Wood said. “Maybe I was (hyped up) and didn’t know it.”

Cincinnati got a pair of singles in the first, when Votto grounded into a run-scoring double play that prevented a big inning.

NOTES: New York is 5-2 in interleague play. … Yankees INF Eric Chavez took batting practice on the field for the first time since breaking his left foot May 5. He also continued fielding grounders at the team’s spring training complex in Florida. … Jeter worked out indoors in Tampa and got treatment for a strained right calf. … Reds LHP Aroldis Chapman, on the DL with an inflamed pitching shoulder, will make his final rehab start for Triple-A Louisville on Tuesday. The Reds then will decide whether to add him to the roster or send him to the minors to continue working on his control.