Cavs deciding who will be No. 1 draft pick 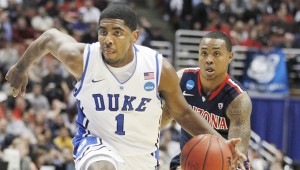 Duke point guard Kyrie Irving is one of the players expected to be the first player selected in Thursday’s NBA draft. (The Ironton Tribune / MCT DIRECT)

Empowered with the Nos. 1 and 4 picks in Thursday’s NBA draft, the Cavs will spend the next 48 hours deciding who to add to their roster. While all signs indicate they will select Duke point guard Kyrie Irving first overall, the Cavs have not yet made any final decisions.

They’ll spend Tuesday and Wednesday setting their board and debating their many options, which could include a trade — or two. The Cavs also have two second-round picks (Nos. 32 and 54) and a $14.5 million trade exception, assets they may package with players or owner Dan Gilbert’s cash to make deals.

On Monday, the team held its last round of workouts by hosting Arizona forward Derrick Williams, Turkish center Enes Kanter and Kentucky guard Brandon Knight at their suburban training facility. Williams and Kanter were in for their second visits, and the pair also met with Gilbert and some of his kids, adding another layer of mystery to the team’s true intentions.

The Cavs have treated this draft with air-tight security, throwing up an impenetrable defense around their plans. Other than a few random tweets on his Twitter account, Gilbert has been out of sight; general manager Chris Grant has made no public comments in weeks and the club closed player workouts to the media.

Nearly one year after LeBron James stripped them of their identity, the Cavs have all the power — and they’re using it.

Aside from the record rainfall, it’s been an otherwise joyous spring in Cleveland, a city not accustomed to feeling too good about its sports teams. The Cavaliers, who lost 63 games and were out of the playoff hunt by January in their first season without James, won the draft lottery in May.

Then James, whose tortuous departure last summer left scars, lost to Dallas in the NBA finals, giving Cleveland fans a chance to gloat over someone else’s misery for a change.

But this draft has spawned optimism and is giving the Cavaliers a chance to accelerate their post-LeBron recovery. As the first team with two picks in the top four since Houston in 1983, Cleveland is confident it will come away climbing a few rungs up the ladder back to contention.

Trouble is, experts have labeled this draft as one of the weakest in recent memory.

Several top players, including lottery locks Harrison Barnes and Jared Sullinger, decided to stay in college perhaps because of concerns about a possible labor lockout. What’s left are players laden with question marks and only Irving and Williams viewed as potential perennial All-Stars.

If there’s a year when having the No. 1 and No. 4 picks is not ideal, this would be it.

And although the Cavs have not publicly committed to settling on Irving, he appears to be their top choice.

In the point-guard-driven NBA, where backcourt players like Derrick Rose, Deron Williams, Chris Paul, Rajon Rondo and John Wall are obscuring their taller teammates as stars, the 6-foot-4 Irving has all the tools — size, speed, ballhandling — to make an immediate impact for the Cavs. At times, Cleveland’s Princeton offense barely performed up to Ivy League levels last season, frustrating first-year coach Byron Scott.

Irving’s not without flaws, however. The major knock on the 19-year-old is that he only played 11 games for the Blue Devils because of a toe injury and there are some who wonder if he needs more grooming.

If the Cavs do take him first, Irving will be the third point guard in four years to go No. 1, joining Wall, who went to Washington last year and Rose, picked by Chicago in 2008.

“He’s a terrific young point guard, and he’s a true point guard,” ESPN analyst Jay Bilas, a fellow Dookie, said in a conference call. “I do liken him to Chris Paul. But he’s not quite as good as Paul. But if you had taken Chris Paul out his freshman year, you might say the same thing. Iving, what he lacks, that a Wall or a Rose or guys like that have, he’s not as explosive an athlete. He’s not in that class athletically.”

Williams, on the other hand, has off-the-charts athleticism. The 6-foot-8 forward wowed the Cavs during his individual workout last week, when he did all he could to convince them that he can play small forward and not power forward, the position most league insiders believe he’s best suited for.

Williams’ visit on Monday was somewhat of a surprise. It’s not clear if the team asked him back or if he requested a second look, which is not uncommon for players slotted to go in the top 10. He averaged 19.5 points and 8.3 rebounds last season, but wasn’t considered a lottery pick until he scored 32 in Arizona’s NCAA tournament win over Duke.

The Cavs have toyed with moving up to No. 2, so they could land both Irving and Williams — a two-handed slam dunk in this class. But that seems unlikely unless they can strike a deal with Minnesota, which has entertained offers but seems reluctant to give up the highest pick in franchise history.

Williams campaigned to be No. 1, but now seems resigned to the Cavs choosing Irving.