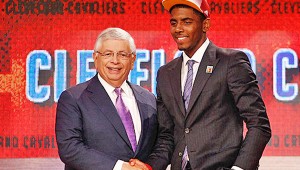 NEWARK, N.J. — Kyrie Irving headed to Cleveland as the No. 1 pick minutes after the NBA draft started.

Jimmer Fredette had to wait hours to officially become a member of the Sacramento Kings.

Plenty other players, from veterans to picks, were on the move Thursday night in a draft that was considered a dud talent-wise but certainly wasn’t dull.

There was no chance the Cavs would deal Irving, confident his foot is healthy enough to lead the rebuilding effort that follows LeBron James’ departure.

Loudly cheered by family and friends not far from where he starred at St. Patrick’s High School in Elizabeth, the Duke point guard showed no signs of the toe injury on his right foot that limited him to 11 games last season as he walked up the stairs to shake hands with Commissioner David Stern.

“I didn’t have any doubts about going to No. 1. I was looking to the organization to pick who they felt was the right choice,” Irving said. “But now to this moment, from being a fan of the NBA draft and now being drafted, it’s a special feeling in my heart and knowing that my friends and family were together, it’s a memory I’m going to remember for the rest of my life.”

A three-team trade that included Charlotte, Milwaukee and Sacramento that had been agreed to earlier in the day wasn’t approved until midway through the second round, forcing Fredette to wait about 2 1/2 hours for his NBA destination to be determined after he was taken with the No. 10 pick by the Bucks.

“Took a little while waiting back there, but it’s a great moment for me and for my family, and for the Sacramento Kings organization,” the player of the year from BYU said. “Hopefully their fan base is excited because I’m really excited to get out there and start the season with them and have a great year.”

A draft that included a record four international players who didn’t play at a U.S. college selected in the lottery soon became dominated by deals, which the NBA was still hustling to approve and announce as the second round wound down.

Stephen Jackson, Corey Maggette and John Salmons were part of the three-way deal, and fellow vets such as Andre Miller, Rudy Fernandez, Raymond Felton and George Hill were involved in other trades.

The deals spiced up what was thought to be a lackluster draft, which was missing its usual buzz with the NBA perhaps a week away from a work stoppage.

Three of the first six players taken were from Europe, capitalizing on the absence of some American college players who might have gone in their spots and made this a stronger draft.

Even Irving has international ties. He was born in Australia while his father, Drederick, played professionally there and said he might be interested in playing for the Australian national team.

After grabbing him with their first No. 1 pick since taking James in 2003, the Cavs used the No. 4 selection on Texas forward Tristan Thompson. They were the first team since the 1983 Houston Rockets with two top-four picks.

The Minnesota Timberwolves took Arizona forward Derrick Williams with the No. 2 pick. The Utah Jazz then took Turkish big man Enes Kanter third with their first of two lottery selections.

The league’s uncertain labor situation hung over the draft, and likely weakened it. Potential top-10 picks such as Jared Sullinger of Ohio State and Harrison Barnes were among those who decided to stay in school, without knowing when their rookie seasons would have started.

Stern, who could lock out his players next week if a deal for a new collective bargaining agreement is not reached, was booed when he came onto the stage at the Prudential Center, which is hosting the draft while its usual home, Madison Square Garden, is undergoing summer work.

New Yorkers made the trip across the river to join the sellout crowd of 8,417, cheering loudly when Kemba Walker and Fredette were taken in the top 10 and booing when the Knicks made Georgia Tech guard Iman Shumpert the No. 17 selection.

The draft was filled with little-known European players. Kanter hasn’t played competitively in a year, forced to sit out last season at Kentucky after being ruled ineligible for being paid to play in Turkey. Lithuania’s Jonas Valanciunas went fifth to Toronto and Jan Vesely of the Czech Republic was taken sixth by Washington.

“Basketball in my country is not so popular, but after this night, I think — I hope — that the basketball will be more popular,” Vesely said. “I will do my best to help that.”

Bismack Biyombo of Congo went seventh as one of six international players who went in the first round, three short of the record set in 2003. The 18-year-old forward moved to Charlotte as part of a three-way deal.

Kentucky’s Brandon Knight went eighth to Detroit as casual fans finally heard a name they recognized again. He was followed by Walker of national champion Connecticut, who wiped away tears on the draft stage after he was taken by Charlotte, and Fredette.

“It’s been like a movie. This whole year has been magical, honestly,” Walker said. “So many different, crazy things have been happening to me, and you know, I just feel lucky.”

Irving insists he’s not trying to replace James — whose highlights were booed when showed on the overhead screen — in a different manner now.

“I’m looking forward to getting to Cleveland,” Irving said. “It’s a big sports town and I cannot wait to embrace all of the fans there and the fan support. I can’t wait.”

Kansas twins Markieff and Marcus Morris went with back-to-back picks to round out the lottery. Phoenix took Markieff at No. 13 and Marcus followed to the Rockets.

Indiana took San Diego State’s Kawhi Leonard at No. 15 and traded his rights to San Antonio for former IUPUI star George Hill. That started a number of trades at the bottom of the first round, including Boston and New Jersey swapping the Nos. 25 and 27 picks and a Minnesota-Houston deal that sent Jonny Flynn to the Rockets, according to a person with knowledge of the trade.

The Associated Press A three-way deal between the Charlotte Bobcats, Milwaukee Bucks and Sacramento Kings that featured the draft rights... read more