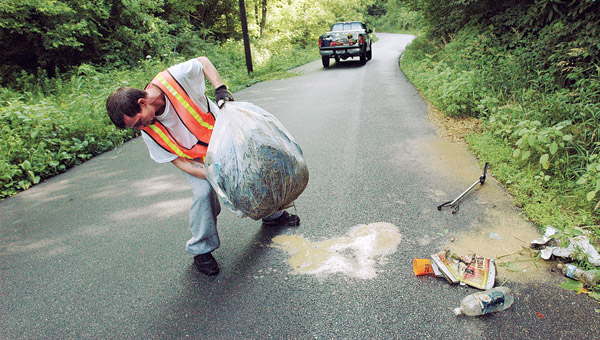 Jonathon McDonald deals with dripping liquid from a bag of garbage during a cleanup on Crabtree Hollow Road Thursday. THE TRIBUNE/JESSICA ST JAMES

PERRY TOWNSHIP — The tiger lilies are blooming in patches along Crabtree Hollow, along with clumps of Queen Anne’s Lace and the inevitable weeds.

But Thursday morning, Palmer was hardly sightseeing. Along with his litter enforcement officer Steve Hileman and Perry Township Trustee Jeff Joseph, they were supervising the cleanup of the roughly two-mile stretch of roadway that is considered one of the most littered in Lawrence County.

With the road closed to traffic Thursday, the community service workers from the Lawrence County Municipal Court and township workers fanned out along the road and began picking up bags and bags of trash, not to mention items that don’t fit into a plastic bag. These included pieces of a child’s old swing set, the burned remains of a mattress and sofa and automobile gasoline tanks, not to mention dozens of tires.

“It’s a constant mess,” Perry Township Trustee Jeff Joseph said. “We clean it up two or three times a year.”

Why is this road the messiest in the county? Joseph speculated it may be the road’s location. It’s an easy pass from State Route 243 to U.S. 52, meaning Lawrence Countians can have quick access to an isolated wooded road to toss their refuse. And it’s near the Ashland-Coal Grove bridges, meaning Kentuckians can sneak over, too, with their trash.

But Palmer is quick to point out that while Crabtree Hollow may be the messiest, every township has a road that is heavily littered and/or is susceptible to open dumping.

What was found along the roadside ranged from standard — beer cans, soft drink bottles and fast food wrappers — to the bags of feces-laden baby diapers. One bag even contained an ID tag of an employee at a local hospital, her name and photo visible.

By Thursday afternoon, Palmer and company had already paid her employer a visit.

“I hate to think how many man hours are spent out here,” Joseph said as he watched the workers.

Joseph said all the trash cleaned up Thursday was accumulated in the past six weeks, since the last time workers cleaned up the road.

Joseph also pointed out that the district only has so much money to spend each year and for every dollar spent on litter cleanup, his township must subtract a dollar from patching potholes and other essentials.

One of the most common sights at illegal dumps and simply strewn along the roadsides are old tires. While tires can be recycled, there is generally a fee involved and those who choose not to pay the fee and dispose of tires the right way sometimes resort to breaking the law.

Picking up someone else’s garbage, particularly if it is left by a roadside, can be dangerous. A passing car might hit you as you stop to pick up that Styrofoam cup — that’s why Crabtree Hollow was closed for Thursday’s cleanup.

“This is the way to do it. I applaud Jeff for it (closing the road),” Palmer said.

A piece of broken glass could be jutting out from that garbage bag, and something besides a gasoline tank might be waiting in the weeds, too.

One community service worker said a black snake bit his boot recently. Palmer said huge spiders were hiding out in scrap tires that were picked up not long ago.

Jonathan McDonald, of Chesapeake, was once a litterbug but by Thursday he was swearing off his criminal activity.

“I had no idea (how bad littering was),” McDonald said. He does now, after cleaning up roads as part of his community service.

A friend had called him and asked him to help dispose of some trash and he agreed — only the disposal did not involve a landfill. He got caught. As part of his punishment, he spent one day picking up 37 bags of trash on Tallow Ridge and one day on Crabtree Hollow.

As he retrieved car parts out of a creek and construction material off creek banks, he uncovered a valuable lesson lurking on those Lawrence County hillsides. It is not fun to clean up someone else’s mess.

“Yesterday was an eye opener,” he said. “Now I realize why it (littering) is such a big deal.”

Palmer asked McDonald why people engage in illegal dumping if they know they might get caught. McDonald replied that if they are successful, illegal dumpers get rid of their garbage without having to pay a trash hauler.

The ideal solution, officials say, is a county-wide trash collection service with fees collected by a single agency. Short of that, Palmer said, it would help immensely if the county required everyone to have garbage collection service.

The county is also cracking down on people who engage in open dumping.

On June 20, Lawrence County Municipal Court Judge Donald Capper sentenced Yvonne Rhodes, of Huntington, W.Va., to one year of probation for dumping her trash — her out of state trash — in recycling containers at the Sam’s Club/Walmart site in Burlington.

Rhodes must also pay the solid waste district $106.42 for polluting their recycling bins, a $300 fine and court costs of $110. There is a probation fee of $25 she must pay as well.

“We are taking a zero tolerance,” Hileman said. “We will prosecute to the fullest extent of the law.”

Palmer said he is thankful that the county’s judges, law enforcement and prosecutor’s office are backing him up.

With education, he hopes to rally the public in the war against dirtiness.

“We need citizens support,” Palmer said. “If someone sees someone open dumping, they need to call us or a township trustee. We’re tired of this and we have to do something, but it’s a matter of catching them.”

Not quite dozen take first steps toward Chesapeake school board seats

CHESAPEAKE — Right now it’s a full field as 11 have stepped forward as possible contenders for four seats on... read more