19 runs not enough as Reds lose series to O’s 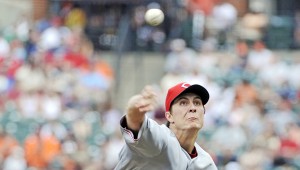 Cincinnati’s Homer Bailey pitched into the sixth inning for the Reds but the Baltimore Orioles defeated the Reds, 7-5, at Oriole Park at Camden Yards in Baltimore, MD., Sunday. (The Ironton Tribune / MCT Direct Photos)

BALTIMORE — The Cincinnati Reds scored 19 runs in three games against the last-place Baltimore Orioles, yet lost two of three to fall into fourth place in the NL Central.

Not all the blame lies with the pitching staff. The Reds were awful in clutch situations at the plate, as evidenced by their woeful performance in a 7-5 defeat Sunday.

Cincinnati stranded 14 and went 1 for 11 with runners in scoring position. Brandon Phillips and Ramon Hernandez homered for the Reds, who fell to 3-9 in interleague play — including 3-6 against perhaps the toughest division in the major leagues.

“I don’t think it has anything to do with the American League East or who we’re playing,” leadoff hitter Chris Heisey said. “We’re just not playing well.”

Cincinnati pitchers issued five walks and yielded three homers Sunday, and Nick Markakis of the Orioles got three hits and a pair of two-out RBIs.

“We had some untimely walks. Left a lot of men on base,” Reds manager Dusty Baker lamented. “From the opening inning we couldn’t get that one or two hits, and Markakis got two two-out hits. That was big. Kind of the ballgame in a nutshell.”

Derrek Lee and Mark Reynolds homered in a four-run fourth inning for Baltimore, and Luke Scott added a solo shot in the seventh. The Orioles had nine home runs in the series, including two by Lee, who had gone nearly seven weeks without going deep before connecting on Friday and Sunday.

“You miss location, especially in this ballpark, something bad is going to happen,” Baker said. “No. 2, they got some guys over there heating up, namely D. Lee.”

The teams combined for 16 homers in the series, including 14 in the last two games. The Orioles hit only seven homers during a recently completed road trip in which they lost six of nine.

The Reds, meanwhile, left 31 runners on base in the series.

“You can’t get a hit every time with runners in scoring position but a lot of times, that’s the game,” Heisey said. “It’s how you hit with guys on base.”

Baltimore went up 5-0 in the fourth when Lee hit a three-run drive and Reynolds sent a 1-2 pitch from Homer Bailey into the bullpen area in center field, an estimated 443 feet from home plate.

Bailey (3-2) was activated from the 15-day disabled list before the game after being sidelined for a month with a sprained right shoulder. The right-hander gave up five runs and nine hits in five innings.

“Overall I thought I threw well, but unfortunately they hit,” Bailey said.

Cincinnati closed to 5-4 in the sixth but could not complete the comeback.

Markakis hit an RBI single in the sixth to make it 6-4, and Scott’s home run off hard-throwing Aroldis Chapman gave Baltimore a three-run cushion.

Koji Uehara worked the eighth and Kevin Gregg allowed a leadoff homer to Hernandez in the ninth before notching his 14th save in 18 opportunities.

Phillips launched Cincinnati’s comeback with a solo shot in the fifth. In the sixth, Guthrie was pulled after giving up an RBI single to Heisey and walking Phillips. Clay Rapada walked Joey Votto to load the bases, and Jim Johnson walked Jonny Gomes and Fred Lewis to force in a pair of runs.

Drew Stubbs hit into a fielder’s choice to end the inning. In the seventh, Phillips grounded out with two on and two outs.

“We’ve got to get it going,” Heisey said. “We’ve got to pitch when we hit and hit when we pitch. We haven’t been putting it together here of late.”

The Reds were without slugger Jay Bruce, who was too sick to play.

“He didn’t feel well (Saturday) night. Even worse as the night went on,” Baker said of Bruce, who leads Cincinnati with 17 homers but hasn’t connected since June 1.

NOTES: Orioles RHP Jake Arrieta (right elbow inflammation) has been scratched from his scheduled start Wednesday against St. Louis. He last pitched on June 20, and the team wanted him to get in another bullpen session before returning. … Phillips’ homer was his first since May 14. … Reynolds made two errors at third base, giving him a major league-high 18 for the season. The 18 errors matches his total for last season with Arizona.

The Associated Press HARTFORD, Conn. — James Jackson assumed that when he was offered a full football scholarship to Ohio... read more