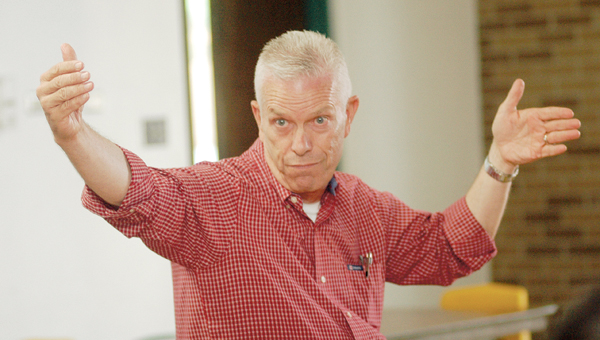 GREEN TOWNSHIP — U.S. Sixth District Rep. Bill Johnson visited southern Ohio Tuesday evening, asking those who attended what their concerns were and expressing some concerns of his own about the federal deficit and the federal budget.

“I’m here to talk about what it will take to put this country on a sound financial footing,” Johnson said. He pointed out that unless immediate and permanent changes are made to the federal financial picture, by 2025 the United States will be spending all of its money on Medicare, Social Security and interest on its now $14.2 trillion-debt.

“We are on an unsustainable path,” Johnson said. “We’ve got to cut government spending and these cuts have got to be real, permanent cuts.”

He said he was against raising federal taxes at a time when the economy was so tenuous.

“Would you support an amendment to require a balanced budget?” Tanner Salyers, of Franklin Furnace, asked.

Johnson said he would if the amendment were a true, effective law and would support budget cuts in the trillions, not millions of dollars.

Johnson also expressed concern at American reliance on foreign oil and said one key to revitalizing not only the economy but the mood of the country is to announce and implement a national energy program. That program would include more domestic drilling for oil and natural gas as well as the clean burning of coal, wind power, solar power and other alternate forms of energy.

“We need a national vision built around energy,” Johnson said.

Johnson pointed out that President Obama’s recent decision to release 30 million barrels of gas from the nation’s strategic reserve was hardly effective, given that the U.S. uses 20 million barrels each day.

Johnson said one way to shore up the economy is to put more people to work. He said he has spoken with business operators who have money to invest but are fearful of the economy and are frustrated by numerous regulations and government hurdles.

“We’ve got to create an environment so people aren’t afraid of investing,” he said.

One woman who attended asked Johnson for help with the National Juvenile Diabetes Research Foundation. She said her daughter is severely diabetic and is suffering because there is no cure.

He took her information so someone in his office could contact her.

A man armed with a knife walked into the University Mart on Liberty Avenue this evening and walked out with... read more