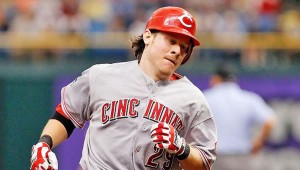 ST. PETERSBURG, Fla. — Ryan Hanigan returned to the lineup and wound up getting a key hit.

“Hopefully, I think we’re closer,” Hanigan said after Reds took two of three from Tampa Bay. “We’re starting to play better baseball. I think guys are upbeat. I think if a few things go right for us we can make a little push here.”

Cincinnati took two out of three from Tampa Bay.

“A good day overall,” Reds manager Dusty Baker said. “Won a close game. Played a very good series. They played a good series, I’ll tell you. They’ve got good pitching over there, too.”

Hanigan’s two-out, three-run shot off James Shields (8-5) in the fourth put the Reds up 3-0. It was his first homer since going deep twice April 3 against Milwaukee.

“I was just trying to relax and get some pitches I could handle,” Hanigan said. “He’s tough. He changes speeds. He’s tough to sit on pitches with because he has four quality pitches. He threw up in the zone and I put a good swing on it. It felt good.”

Hanigan was back in the lineup after sitting out the previous three games due a sore lat muscle.

Edinson Volquez (5-3) gave up three runs and four hits in 6 1-3 innings. The right-hander struck out seven and walked three.

After Logan Ondrusek and Bill Bray combined for 1 2-3 scoreless innings, Francisco Cordero pitched the ninth for his 16th save.

Shields had given up just two runs in his previous three starts, all of which were complete game wins.

“I think I was two pitches away from having shutout,” Shields said. “It’s kind of the way the game works between giving up no runs or four runs.”

The right-hander nearly worked out of a two-on, no-out jam in the fourth by striking out Jay Bruce and Jonny Gomes, but Hanigan broke the scoreless tie on his third homer of the season.

Evan Longoria, who hit a game-ending solo homer in the ninth inning of Tuesday night’s 4-3 win over the Reds, cut the deficit to 3-2 on a two-run double in the sixth. The All-Star third baseman was doubled off second after Matt Joyce lined out to second.

Tampa Bay dropped to 19-20 at home this season.

“There’s not really an answer for it, but just really focus on keep playing hard,” Longoria said. “Try to eliminate those mental mistakes that sometimes cost us games, myself included.”

Longoria has driven in 13 runs in his past six games.

Cincinnati went up 4-2 on Fred Lewis’ seventh-inning RBI single. B.J. Upton got the run back on a solo homer in the bottom of the inning.

Upton has four homers in his last six games.

Volquez allowed two baserunners — both on walks — as he cruised through four innings before Casey Kotchman got the Rays’ first hit, an opposite-field single down the third-base line leading off the fifth.

“You know what? I want him to keep making history as long as he’s here,” Upton said. “It’s fun to watch. I’m happy for him.”

Notes: Volquez won on the road for the first time since May 6. … Longoria has six RBIs over 25 home games this season, with three coming in the last two games. … The Reds are 8-1 overall against Tampa Bay after winning two of three in the series. … Shields assisted on all three first-inning outs, fielding two grounders and picking off Joey Votto at first. He has picked off eight runners this year. … Shields finished with 10 strikeouts and two walks.