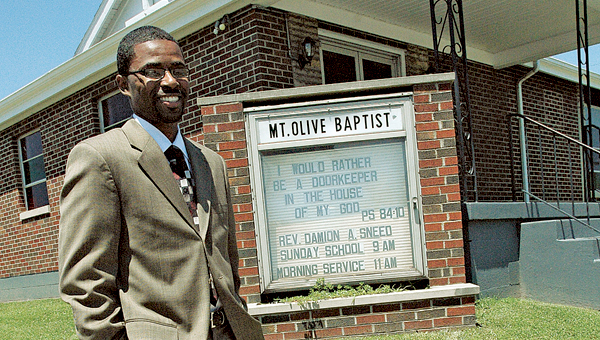 Mt. Olive Baptist Church will have an official installation ceremony Sunday for its new pastor. Already he and his family are settling into life in Ironton.

The Rev. Damion Sneed began his pastorship a few weeks ago. A native of Dayton, Sneed was not familiar with southern Ohio until he got the call to come here.

“A year ago after I was ordained I got a call from another pastor who was a deputy in the Ohio Baptist General Convention,” Sneed explained. “He said ‘there’s a church in Ironton I want you to put in for.’ The chairman of the deacon board set up a time for me to come. I came in August of last year. I guess they liked me. They invited me back in October, January and March and then they voted in April.”

Sneed is a 2005 graduate of Cedarville University. He served after that as director of Christian education for Greater St. John Missionary Baptist Church in Dayton.

Sneed said he hopes to focus on discipleship in his new position. As inspiration, he points to the first verse in the Book of Acts, Chapter 2, which reads, “And when the day of Pentecost was fully come, they were all with one accord and in one place.”

He pointed out that Jesus spent much time with his disciples and gave them the opportunity to go out into the world and be agents for change — but first he trained them.

Sneed and his wife, Jennifer, have been married eight years and have two children with one on the way. His daughter, Soteria (the name is Greek for “Salvation”) will be 5 this week. Jeremiah is 2. Baby number three is due in December.

The installation service will be at 4 p.m. Sunday at neighboring First Baptist Church of Ironton, corner of Fifth and Vernon streets. More than 200 people are coming from his home church in Dayton for the service.

An engineer and part-time minister is hoping to be a member of the Ironton City Schools Board of Education. J.... read more