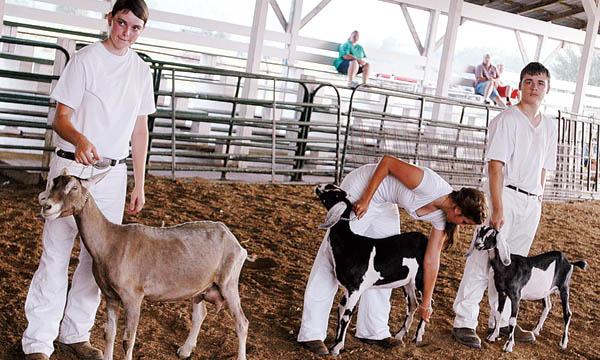 ROME TOWNSHIP — It didn’t take three times trying because the first time was the charm when Beth Jenkins took home the grand champion trophy in the yearling class of the dairy goat show Sunday evening at the Lawrence County Fair.

As Jenkins made her way around the livestock arena, her dad, John, sat in the stands with a camera ready.

And he was proud.

This was Beth’s first time ever showing goats. Normally she shows feeder and breeding beef.

“I think she’s done well,” he said. “This was her little project. She wanted to do it all on her own, the feeding, the watering, working with it.”

In both yearling and in-production goats, Fuhrmann said she was looking for characteristics that are the sign of a first-rate dairy goat: long necks, strong feet and a body capacity necessary for good milk production, such as a wide, deep barrel (body) and udder size and development.

“In dairy, it’s all about the milk production,” Fuhrmann said.

What is the secret to successfully handling a goat for competition?

“You work with it and you play with it,” Cailey Huismann said.