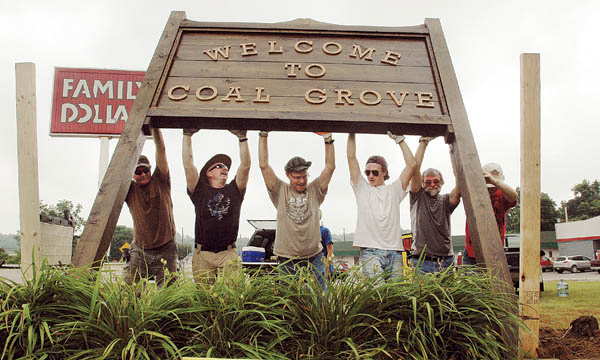 COAL GROVE — People driving through Coal Grove will get a much warmer welcome thanks to the work of one aspiring Eagle Scout.

Instead of sleeping in on Saturday morning, like many recent high school graduates may have been doing, Michael Wilcoxon, 17, was making his community a better place by installing a new “Welcome to Coal Grove” sign at the entrance to the village in front of the Family Dollar.

A member of Boy Scout Troop 106 in Ironton, Michael said he wanted his community service project, required so he can advance to the rank of Eagle Scout, to be in his home community of Coal Grove.

“I asked the mayor if there was anything I could do,” Michael said, “and he mentioned the old welcome sign.”

“It was leaning, some of the letters were broken,” Mayor Larry McDaniel said of the near 10-year-old sign.

McDaniel said Michael is the first Boy Scout to come to him and ask how he could help the village.

The mayor wasn’t the only one singing Michael’s praised. Michael’s mother, Vicki, said it was a very proud moment for her and her husband, Brian, as well.

“This is something he has worked very hard for,” she said of Michael’s Eagle rank. “The things they learn in Scouts, they’ll take with them the rest of their lives.”

After the sign was hoisted into place and cemented into the ground, Michael said he felt great about the project that took months to organize and raise money for.

“It makes me feel proud that I did something to help the community,” he said.

Randy Franz, assistant scout master, said projects like these gel the troop as well as leaves something behind for the community to enjoy and sets a good example for other youth.

“I’m very proud of these boys,” Franz said. He also expressed that any youth complaining that there isn’t anything to do around here, simply needs to get involved.

The date for Michael’s Eagle Scout ceremony isn’t set yet, but will be within the next month, his mother said.

Because Lowe’s gave a discount for the sign materials, the extra money will go towards solar lights to illuminate the sign.

A 5K run/walk will be held Saturday to support the Faith and Fitness Center at First Baptist Church in Ironton.... read more