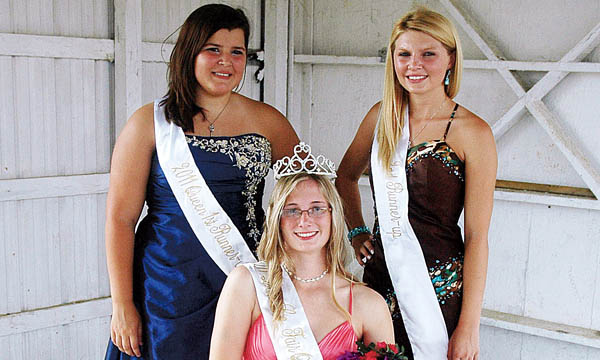 ROME TOWNSHIP — The oppressive heat tried to compete with the enthusiasm of the fair crowd at opening ceremonies and the weather lost.

Cheers, yells and cries of encouragement filled the packed bleachers at the grandstand Monday afternoon as everyone waited for the crowning of this year’s queen and princess and their courts.

Dean Cooper of the Proctorville VFW 6878 began the festivities by introducing Holly Marin who sang the National Anthem as the honor guard raised Old Glory. Then the guard fired a tribute volley.

Next Ray Dutey, GOP party chief, and Stephen Burcham, county treasurer and Democrat, gave checks to the 4-H to offset fair costs. This was the 10th year for the Republicans to contribute $1,000 to cover cost of the trophies and ribbons. It was the first year for the Democrats to make a donation.

A variety of scholarships were awarded to the youth including three from Ohio Valley Bank to Dakota Barnett, Kelsey Huddle and Zack Sloan. Shawna Myers, Brianna Schneider and Jessica Marie Jenkins were awarded 4-H scholarships.

Then Megan Nichole Rigney, daughter of Roger and Karen Rigney, was crowned queen of the fair. Megan is a graduate of Symmes Valley High School and a three-year member of the Collins Career Center FFA.

“I’m a nervous wreck,” she said. “My knees are so shaky. These are wonderful and beautiful girls, all of them.”

Megan’s court was made up of Natasha Nance, second runner up and a senior at Symmes Valley High School, and Jessica Marie Jenkins, first runner up and graduate of Dawson-Bryant High School.

Fair princess was Kaitlyn Payne, daughter of Shannon and Erin Payne and a student at Symmes Valley Junior High School. She is a seven-year member of the Arabia All-Stars 4-H Club.

“I was just so nervous,” she said after receiving her crown. “I was so glad. I didn’t think I would get it.”