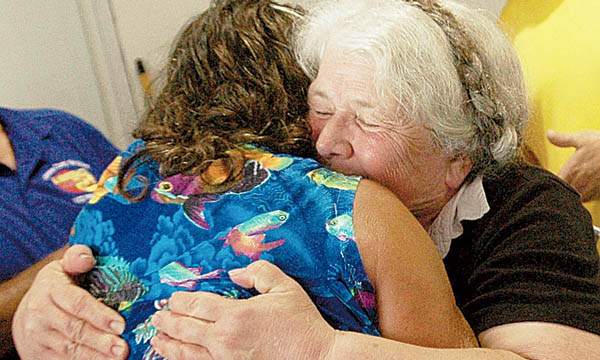 Mary Gene Patterson, widow of George Patterson, receives a hug from friend Flo Ellis during a dedication ceremony of the 4-H building Monday.

ROME TOWNSHIP — The George Patterson clan was in full force Monday afternoon as they and members of the Lawrence County Fair Board gathered for a special dedication.

This year the fair board dedicated the entire week of the fair to the memory of Patterson, who was the longest-serving county commissioner, in office until his death in July 2007. Also in a ceremony the board renamed the 4-H building the George Patterson 4-H Exhibit Building.

“This is for a great leader and a great person,” Freddie Hayes, fair board president, told the group assembled outside the shelter. “And I want to thank Mike (Patterson, county clerk). He gave the money to put a new roof on. We appreciate the Patterson family.”

After Patterson’s son, John Paul, led the group in prayer, Mike Patterson acknowledged for his family the tribute given to his father.

“You have honored my family,” he said. “He would be amazed at what has been done here (on capital improvements). He would want you to continue with what you are doing. It is about the kids. Coming up I look forward to seeing the progress.”

The fair board invested $75,000 in improvements from the new barn for the rabbits and chickens to the new shelter roof to new sidewalks. Next on the agenda is to replace the livestock barn and arena.

Originally, the board planned to do it in stages. But now it is seeking pledges to enable the replacement of the entire structure. Already the board has some pledges and is asking for individual commitments of $1,000 a year for five years to be paid after the barn is built.