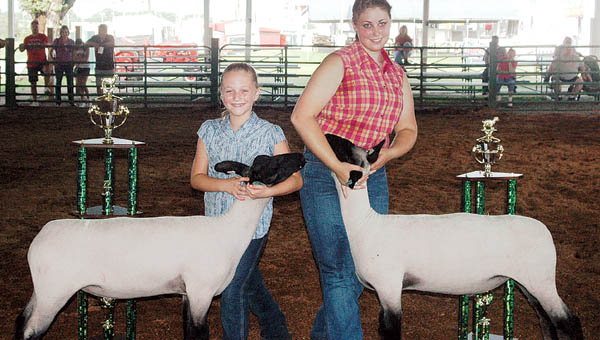 PROCTORVILLE — Bright and early Tuesday morning, 4-Hers showed off their chops at the Lawrence County Fair market lamb show and showmanship competitions.

“It feels pretty good,” she said.

“She’s worked hard everyday since school’s been out,” she said. She also said she hoped the experience of taking care of livestock and competing will make her more responsible.

And Kara is already looking forward to the market animal sale Saturday, where she hopes ‘Pop’ will bring in enough money to buy her a fainting goat.

“It’s a goat that faints when you scare it,” Kara said.

Kelsey Huddle, 18, took the reserve prize this year with her lamb “Rigsby.”

This is Kelsey’s last year participating with 4-H and she said it was a bittersweet feeling.

Both Kara and Kelsey also won first place in the junior and senior showman competition.

“Don’t ever downplay the importance of showmanship,” Hale said

Hale said Kara had just a little more ring presence than her other junior competitors.

“I just had to make sure the legs lined up and had to brace him,” Kara said of her lamb, adding that she was still really excited.

Kelsey said she walked her lambs every morning and evening to prepare for the competition and getting the lambs used to her touching their legs and bracing them.

“It’s not easy,” she said. “I’ve had my ups and downs. Every year is different.”

Her father, Dave, said he would miss his daughter being able to compete with the 4-Hers next year, but added that all the hard work she put into it paid off.

“I think the bottom line is, you have to give God the glory,” he said. “The good Lord has blessed me with four good kids, and a lot of credit has to go to their mother.”

Both Kara and Kelsey will compete in the showman of showmen competition Friday.

SHERIDAN — A car accident has been reported on U.S. 52 at the entrance to County Road 1 in Sheridan,... read more