Goat showmen stand out for judge 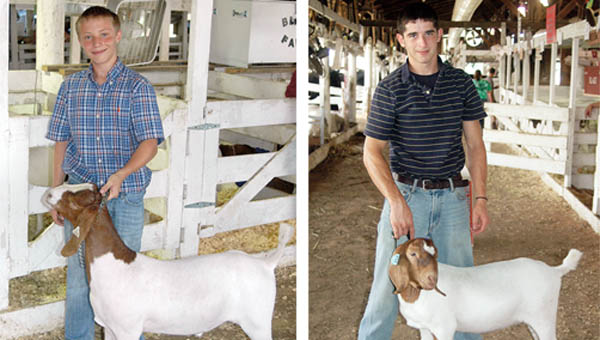 ROME TOWNSHIP — Diligence and hard work were traits the judge of the goat showmanship competition noticed on Tuesday at the Lawrence County Fair.

Judge Bob Hare has been judging livestock for 30 years and at all levels of competition. When he saw 12-year-old Peyton Hayes, he said he knew by his demeanor that he was “there to win it.”

“It feels good,” Peyton said of his junior showmanship win. “The past couple of years I didn’t do too well.”

To prepare for a winning title this year, the young goat showman said he worked with his goat, walking it everyday. Peyton also watched the other classes being judged, looking to see what the judge was looking for.

“I’m excited for him,” his father, Paul said. “He worked very hard.”

Hale said senior showmanship winner, Daniel Mootz, was never satisfied with his goat in the ring, which is why he picked him above the rest of his class.

Not content until his goat was perfect, the 17-year-old said that just comes with the territory, but also, that’s just how he likes to show an animal.

“I’m pretty picky about how my goat stands,” Daniel said.

This was Daniel’s eighth year showing goats at the fair.

“It’s a lot of work that paid off,” he said. “It feels like you earned it. It makes you proud.”

Both Daniel and Peyton will compete in the showman of showmen competition Friday.