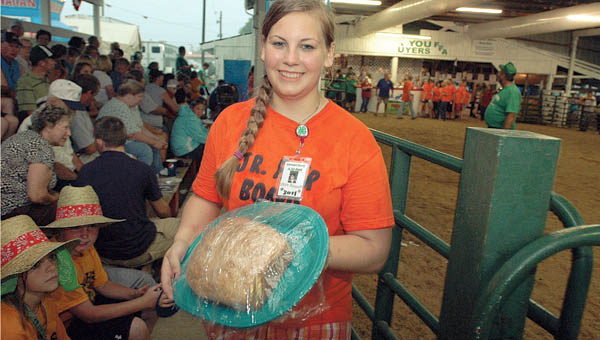 ROME TOWNSHIP — Plate of chocolate chip cookies, anyone? How about a piece of peanut butter fudge?

One plate of cookies was sold for $220 Monday evening during the annual sweet tooth auction at the Lawrence County Junior Fair.

Under a loud and thunderous downpour at the fairgrounds, sweet tooth aficionados watched as 4-H members strolled around the livestock arena with desserts that were sold to the highest bidder.

The Lawrence County Fair Board and Cooke’s Farm Center jointly bought the top-earning cookies. Cooke’s also purchased a peach pie for $55 and another for $40 and later a plate of brownies for $200. The fair board also purchased a tray of cinnamon rolls for $70 and a plate of beer bread for $90.Tina Sias paid $100 for a tray of brownies. Lawrence County Commissioner Les Boggs paid $50 for a plate of M&M Cookies; fellow Commissioner Paul Herrell snatched the first offering, a tray of peanut butter fudge, for $70 and then picked up another for $90. His wife, Linda Herrell paid $55 for a chocolate cake.

Just before the auction began, the Kitts Hill Willing Workers 4-H Club donated $500 to the fair board for its new barn fund. Adviser Kathy Gore said the 4-H members solicited donations during this year’s Gus Macker tournament in Ironton.

“I would like to challenge other clubs to do fundraisers because this (new barn) would benefit the kids,” she said.

The Willing Workers has 22 members. The fair board is raising money now to build a new barn. That is one of several improvements that are either being planned or have been completed recently at the fairgrounds.