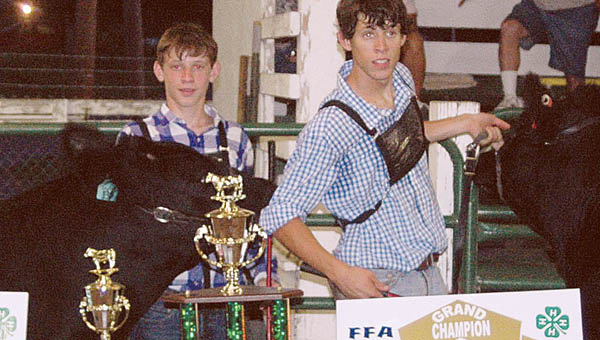 ROME TOWNSHIP — It was a family affair at Wednesday’s market cattle show at the Lawrence County Fair.

Just as in 2009, brothers Josh and Brandon Craft took the grand and reserve titles, and both agreed that working together made all the difference.

“It feels great,” Josh said about the win. “It was a lot of time and effort. It’s amazing.”

For 18-year-old Josh, this was his last fair competition but he said he would continue to help his younger brother, Brandon, 14.

“I’m going to miss it,” Josh said, adding that he is not glad in the least that his 4-H run is over.

Brandon was also excited about his reserve win.

To prepare for showing his calf, “Frank,” Brandon said he worked with him regularly, walking him and exercising him.

Donny Craft, the boys’ father, said he was proud of his sons’ wins, but is also glad the year has come to an end.

Donny was also hopeful that his sons learned a lot about responsibility by participating in the 4-H program.

“It’s all about the experience,” he said. “4-Hers deserve to be rewarded for their efforts and trying hard to raise good animals.”

This year’s cattle judge, Warren Wolf, also said he was proud of the hard work all the 4-Hers put in to their cattle and had a bit of advice for those that might be considering joining 4-H.

“Don’t be scared off by all the hard work,” Wolf said. “because the reward is so great. Very much worthwhile.”