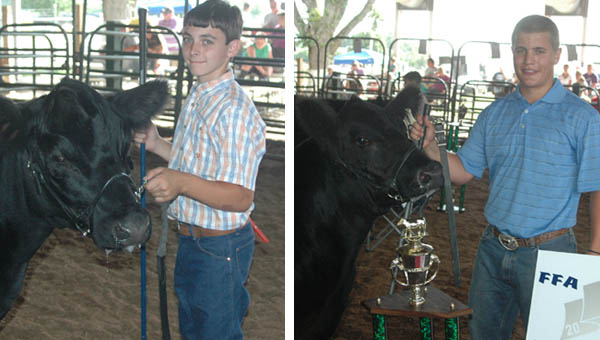 ROME TOWNSHIP — Hard work and dedication were the keys to success for the two 4-Hers who took top honors in the heifer breeding competition Thursday night at the Lawrence County Fair.

Markie Norris of Kitts Hill, a member of the Starlite 4-H, took the Grand Champion trophy.

“It’s good,” Markie said about his win. “You work with them every day.”

Named Reserve Champion was Cody Myers of Waterloo, also a member of Starlite. Cody has been competing for nine years.

“It always feels good to win,” he said. “It takes hard work in the barn every evening.”

The two competitors were back in the ring taking honors again during the beef breeding showmanship competition. Cody pulled a first in the senior division while Markie was named junior showman after competing with three classes of fellow juniors.

Judge for the evening was Mike Koverman from Minford who praised all the competitors for their positive attitude, professional appearance and courtesy to each other.

“They have a lot of ring presence,” he said. “They are polite and knowledgeable about their projects. … Everyone looks presentable.”

He especially applauded the youth when they would extend a helping hand to their colleagues in the ring. In one case, that was literally, when a competitor’s calf balked and lay down, needing a hefty push to get back up on its feet.

“You can be competitors, but you can be a good sport,” Koverman said.

After the trophies were handed out, all the participants were called back in the ring to receive checks from the beef breeding sweepstakes. A total of $880 in prize money was given out. Checks ranged from $10 to $150 for second place to Megan Rigney and $250 to Cody Myers for first place.

KITTS HILL — Opening a new restaurant can be a tricky business, but one couple says they are only giving... read more