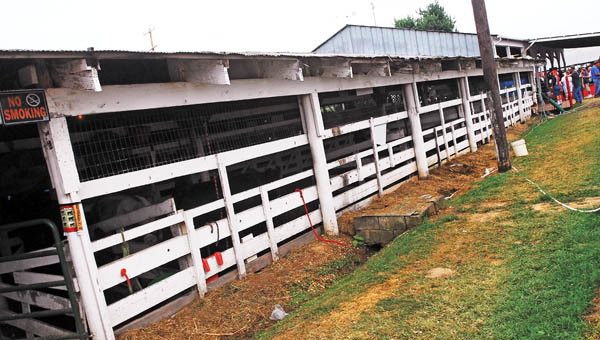 A side view of the livestock barn located on the grounds of the Lawrence County Fair.

ROME TOWNSHIP — Randy Lambert can remember showing animals at the Lawrence County Junior Fair livestock arena years ago when he was a 4-H kid.

And he’s not the only one who apparently thinks so.

Saturday, Lambert and Fair Board President Freddie Hayes Jr. spearheaded an effort to remind other Lawrence Countians of what the fair meant to them and how the kids today need someplace a little more modern.

The reminders were effective. By noon, the fair board had collected more then $400,000 in pledges from Lawrence County business, government and social leaders to build a new livestock barn and arena at the fair.

The livestock barn is one of the showplaces at the fair each year. The large animals are housed and exhibited at the arena. The existing structure was built several decades ago.

“I used to show here back in the 60s,” Larry Kirkpatrick, a 4-H advisor and volunteer said.

Plans are for a new building 300 feet long and 60 feet wide. Goats and lambs would be housed on one end of the facility, hogs and cattle on the other with the arena in the middle. If enough money is raised, Lambert said the new arena may be climate controlled.

Lambert said the fair board would borrow money from local banks based on pledges so the project could start later this year. He hopes to have the new barn and arena ready for next year’s fair.

Bob and Ryan Sells of Cooke’s Farm Center pledged $60,000 to have the goat and lamb barn named for them.

Lambert and Fair Board President Freddie Hayes Jr., pledged $60,000 and will have the steer and hog barn named for them.

Bob Calloway of Rolo Construction and Excavating pledged to demolish the existing facility and haul away the debris, a job Lambert estimated is worth $50,000. Why did Calloway agree to donate his time and labor?

Premier Management of Chesapeake pledged $100,000 and will have the livestock arena named accordingly. Why?

“We have four boys so we’ll probably be here many years to come,” said Tiffany Barker, who owns Premier along with her husband, John. “We decided even before we came today we would do this. They need it.”

Even 4-H clubs got in on the action. Ranchhands pledged $1,250. They will raise money to meet their pledge just like the Kitts Hill Willing Workers, who made a $500 donation earlier in the week and issued a challenge to other clubs to join them. Ridgerunners pledged $250 a year for five years. Two 4-H kids, sisters Madison and Morgan Klaiber, pledged $50 a year from their projects each year for the next five years. Why?

“So we can have a new barn,” Morgan Klaiber said.

Throughout the afternoon, Lambert announced other pledges from Equine Medical Center and Proctorville Animal Clinic, who will donate their veterinarian’s services to the fair each year for the next five years, totaling approximately $25,000.

Asked if he had expected such enthusiasm for the project when he got up this morning, Hayes said he had.

“People have been so fired up this week over the place,” he replied. “They know we’re going forward with it.”

And he said people who pledged knew what the money was going for: All those 4-H kids now and in the future who will have a new place to keep and show their animals during the fair.

Kirkpatrick said the fair board in place now is the most forward-thinking he has worked with and pointed to the new rabbit barn as an example.

“The rabbit judge who was here on Monday said he judges all over the U.S. and Canada and said ours is the best he’s ever seen,” Kirkpatrick said. Of the plans for a new barn and arena, he said, “We will be the talk of Ohio when it is all said and done.”

Theft, drugs among charges on docket in county court

A man accused of breaking into an abandoned house in March bypassed most of the judicial process Wednesday by pleading... read more