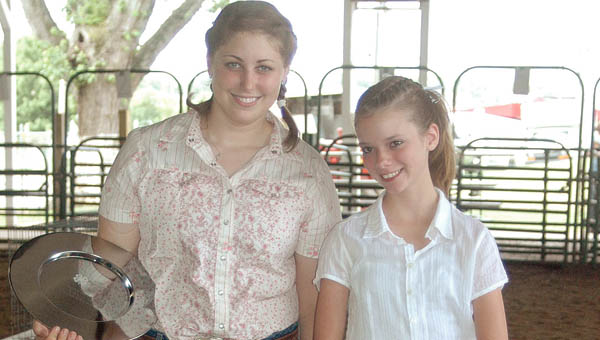 PROCTORVILLE — The best of the best showed off their knowledge and skills Friday at the Lawrence County Fair Showman of Showmen competition.

The competitors were judged on showing hogs, steers, lambs, goats, chickens and rabbits.

You might recognize this year’s senior and junior winners, as they also took the titles last year.

Kelsey Huddle, 18, finished out her last year of 4-H with her third Showman of Showmen award.

“It feels so good to end it like this,” she said.

This year’s senior competition actually came down to a tie between Kelsey and Cody Myers. The judge, Jenna Meeks, gave a series of questions to the pair as a tiebreaker.

“I didn’t want to,” Meeks said, “because they both earned it.”

Kelsey came out on top, and said she was surprised she was even in the top two because the lamb she showed got away from her and ran around the ring.

Despite the fumble, Meeks said Kelsey, as well as Cody, showed poise and a natural ability in the ring.

Kelsey said she hopes to stay involved with 4-H and assist with children wanting to show market lambs.

“I want to boost the species,” she said. When Kelsey started showing lambs 10 years ago, she said there were nearly 40 lambs in competition, but that has since dwindled, with only 12 in competition this year.

Kelsey has already gotten a start on mentoring young competitors, like this year’s junior Showman of Showmen winner, Kimberly Schmidt.

The 13-year-old showed fancy poultry earlier in the week but got some tips from Kelsey on showing lambs.

“I feel pretty excited,” Kimberly said about her win. This was her second year showing poultry and competing in the Showman of Showmen contest.

“I didn’t know much about the goats,” she said. “I just tried my hardest. I guess I did pretty good.”

Next year, Kimberly will be at the senior level.

“I’m really going to have to learn about the animals,” she said, adding that the senior level is more hands-on.