Reds’ offense still struggling with another shutout loss to Pirates 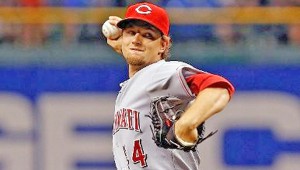 Cincinnati’s Mike Leake allowed just two hits and one run but still came up the losing pitcher as the Reds lost 1-0 to the Pittsburgh Pirates on Tuesday. (The Ironton Tribune / MCT DIRECT PHOTO)

PITTSBURGH — The Cincinnati Reds excel in getting runners on base. Getting them home, however, is another matter entirely.

The up-and-down Reds continued to struggle against the surging Pittsburgh Pirates, losing 1-0 on Tuesday night to fall five games behind the surprising NL Central leaders.

Cincinnati hasn’t scored in 18 innings through the first two games of the three-game set, leaving 18 men on base in the process.

“We had some runners on base early in the game and we just couldn’t get that hit,” manager Dusty Baker said. “This is frustrating when you’re not scoring runs.”

The anemic offense wasted another solid effort by Mike Leake (8-5), who yielded one run and two hits in six solid innings. That single run was just too much for the Reds’ sputtering offense to overcome against James McDonald (6-4) and three relievers.

““It’s frustrating because you know these are important games for us and we’re playing good baseball, pitching well, keeping ourselves in games defensively,” Cincinnati catcher Ryan Hanigan said. “We just need to keep working for those hits.”

The sooner the better if the Reds want to stay within shouting distance of the Pirates. Cincinnati (47-50) fell three games below .500 for the first time this year due in large part to an inability to beat Pittsburgh, which is 7-1 this season against the defending division champs.

“They’re pitching good and they’re getting what they need from whoever they need it from,” Baker said of the Pirates.

Cincinnati’s best shot came in the seventh when the Reds loaded the bases with one out. But Joe Beimel came in and struck out Jay Bruce before Chris Resop got Drew Stubbs to hit a meek grounder to first to end the threat.

“I don’t know if we’re pressing or not; we’re just not getting it done, you know?” Baker said. “We’re missing pitches, and that’s what happens.”

Cincinnati put two on in the ninth against Joel Hanrahan, but he worked out of it to record his 28th save.

“The bullpen has been the unsung hero for this team this year,” McDonald said. “They’ve come in in a lot of big situations and got the job done. Those guys picked me up tonight.”

Pittsburgh got its only run in the first. Josh Harrison singled with one out, Neil Walker doubled to left and Harrison scored on Andrew McCutchen’s groundout. The Pirates did little after that as Leake held them hitless over his final five innings of work.

“I’m the type of pitcher that likes pitching in close games,” Leake said. “It makes me focus more. But we’d love to get run support but this is baseball and we’ve just got to move on.”

Baker admits he’s a bit mystified by his team’s struggles. Cincinnati hasn’t won consecutive games in over a month and the momentum they gained by taking two of three from St. Louis right after the All-Star break is gone.

When the Reds hit, they don’t pitch that well, and on a night when Leake was as sharp as he’s been all season, Cincinnati’s bats went silent.

“We didn’t have a bunch of opportunities but we had some late,” Baker said. “We just couldn’t get that hit or that sac fly or whatever we needed at that time.”

NOTES: Walker extended his hitting streak to 13 games. … Cincinnati rookie SS Zack Cozart went hitless in four at bats, ending a seven-game hitting streak to start his career … Cincinnati 3B Scott Rolen sat for a second straight game to deal with soreness in his right shoulder. … Pittsburgh SS Chase d’Arnaud was given the night off after tweaking his neck while sliding into third base on Monday night. Hurdle expects d’Arnaud to return as early as Wednesday.

The Associated Press The NFL Players Association’s executive committee reviewed only portions of a proposed deal to end the lockout... read more