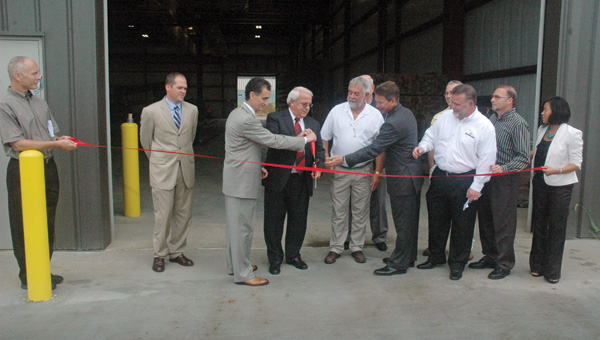 Tuesday morning members of the Lawrence Economic Development Corp. and officials from Chatham Steel cut the ribbon to open the latest business to The Point. the tribune/Lori Kersey

SOUTH POINT — Just as the county’s economic leaders were celebrating a new boost to the local job market, they got news from the state that could mean more money — and jobs — coming in the future.

Tuesday morning members of the Lawrence Economic Development Corp. welcomed the latest business to The Point industrial park during a ribbon cutting for Chatham Steel.

The Savannah, Ga.-based metal distribution company opened its latest center that initially brings 20 jobs to the county with the intent of increasing that to between 45 to 50 employees. Jobs range from clerical to sales to material handlers and processors.

Just before the ceremony, LEDC got word that the state Department of Development was tentatively offering a combination of a loan-grant to The Point that will be used to erect the next spec building at the park.

“Most customers we target will buy three of this and two of something else and they want it tomorrow,” Bert Tenenbaum, Chatham president, said in an interview before the ribbon cutting. 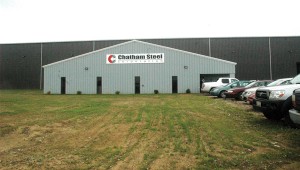 The Savannah, Ga.-based metal distribution company opened its latest center that initially brings 20 jobs to the county with the intent of increasing that to between 45 to 50 employees. the tribune/Lori Kersey

Right now the 50,000-square foot center houses 3,000 tons of product with the intention of increasing that inventory. Reaching out to new markets introduced the company with five other centers in the Deep South to southeast Ohio.

“We began serving the coal area of West Virginia off I-64 out of our Durham, N.C., center,” Tenenbaum, said.

However, distance made that market difficult to develop.

“We realized there was a lot of business to be had throughout West Virginia, northern Kentucky and southeast Ohio,” he said. “We started looking between Charleston and Huntington. We couldn’t find anything that was suitable.”

That’s when the county leaders began working with Chatham to find a location here. Originally, the company was to locate on land they purchased in the Hanging Rock area of the county in 2008.

“Economic conditions delayed our plans,” Tenenbaum said during the ceremony. “There was a little thing called the Great Recession. We still pushed forward.”

About a year ago, Chatham switched locations to The Point where a spec building was available.

“Whenever we see people in the public, they say, how about jobs,” Boggs said. “I want to thank Chatham for their investment in Lawrence County. As a county we hope this is one of very many things which we could do to help business come into the county.”

Pending approval of the development director, the county is expected to receive a grant of $280,000 and a $720,000 low-interest loan to build the latest spec building at The Point. The county will contribute land valued at $300,000 for the 50,000 square foot structure that could be up by spring.