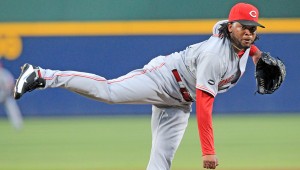 Cincinnati pitcher Johnny Cueto pitched six-plus strong innings Wednesday and the Reds finally scored in their series against Pittsburgh and they beat the Pirates 3-1. (The Ironton Tribune / MCT Direct Photo)

PITTSBURGH (AP) — Cincinnati Reds manager Dusty Baker kept telling his team it would only take one hit to break out of a woeful slump.

Turns out, it only took one Pittsburgh Pirates error.

The Reds took advantage of a pair of miscues from Pittsburgh shortstop Chase d’Arnaud to beat the Pirates 3-1 on Wednesday and avoid a three-game sweep.

Johnny Cueto (6-3) gave up one run over six innings to whittle his ERA to 1.98 as Cincinnati found a little punch following two nights of futility against the surprising NL Central-leading Pirates.

Though Baker has stressed it’s not time to panic, Cueto knows the Reds are at a critical point in their season. The defending division champions haven’t won consecutive games in over a month and have dropped off the pace in the crowded Central race.

“What I was thinking is, ‘We need to win today, and I give a good game, a quality start,”’ Cueto said. “I need to make good pitches, and the team will help me with runs and we can get a win.”

The Reds didn’t exactly bust out against Pittsburgh starter Jeff Karstens (8-5), but they didn’t let a little charity go to waste.

An error by d’Arnaud on a routine play to start the game helped Cincinnati plate its first run since Sunday, and a bobble in the fifth extended the inning and allowed the Reds to put together the final margin.

“They were two plays we need to put away,” said Pittsburgh manager Clint Hurdle. “That basically was pretty much the difference.”

Chris Heisey and Jay Bruce had two hits apiece for the Reds, who beat Pittsburgh for just the second time in nine tries this year.

D’Arnaud made a pair of huge plays in a 2-0 win Monday. His diving stop in the hole got Pittsburgh out of a bases-loaded situation in the first inning and his first-to-third sprint in the fourth opened the door for a pair of Pittsburgh runs.

The 24-year-old, who was injured sliding into third Monday, sat out Tuesday’s 1-0 victory as a precaution. He didn’t exactly look comfortable upon his return. Heisey led off the game with a routine grounder that d’Arnaud threw into the stands. Heisey would later score on a sacrifice fly from Joey Votto to end Cincinnati’s longest scoreless streak in over a year.

“We were going to try to score a run any way we could early, especially knowing the fact that they don’t give up a lot of runs — especially here in their ballpark,” Baker said.

Miguel Cairo’s sacrifice fly in the second put Cincinnati up 2-0 and, after Andrew McCutchen’s double cut the lead to one, another d’Arnaud mistake gave the Reds some breathing room in the fifth. He had trouble coming up with a two-out grounder by Cueto, extending the inning. Heisey followed with a single and the pitcher came home on a single by Edgar Renteria.

It was more than enough for Cueto, who has been the NL’s best pitcher since making his season debut on May 8. He’s now made 11 straight quality starts, the longest streak by a Reds pitcher since Bronson Arroyo put together 13 in 2009.

“This has been the best (stretch) I have had in my career,” Cueto said.

It certainly looked that way as Cueto used his deceptive delivery to strike out four and walk three while giving up just four hits.

Cueto’s numbers would be even better if not for three blown saves, but four Cincinnati relievers had little trouble shutting the Pirates down late, with Francisco Cordero working a perfect ninth inning to pick up his 19th save.

“Our bullpen came in and did a great job,” Baker said. “That was a good way to win a ballgame.”

And salvage a series. Cincinnati went down meekly in a pair of shutout losses on Monday and Tuesday, leaving 18 runners on base in the process. After letting countless opportunities slip away the previous two days, they weren’t complaining even if Votto wasn’t exactly ready to say the Reds were back.

“Anybody who’s going to hang our success on a first-inning sacrifice fly I think is wound a little too tight,” Votto said. “We’ll be fine, and we’re going to score runs.”

The Pirates, who woke up in first place for the second straight day, have ridden solid pitching and great defense to the top of the standings. They got plenty of both on Wednesday — with McCutchen, Walker and third baseman Brandon Wood all turning in gems — but again failed to hit.

Pittsburgh’s only real threat came in the fourth when Neil Walker was hit by a pitch and McCutchen doubled him home. Cueto worked his way out of the jam and Pittsburgh didn’t get a runner to third the rest of the day thanks to stellar work from the bullpen.

Logan Ondrusek wiggled Cincinnati out of a two-on situation in the seventh, Aroldis Chapman overpowered two Pittsburgh batters in the eighth and the Pirates went down quietly in the ninth.

Notes: Walker went hitless in three at-bats to end his 13-game hitting streak. … Cincinnati 2B Brandon Phillips was given the day off by Baker, who felt Phillips needed a breather following last week’s trip to the All-Star game. … Pittsburgh LF Jose Tabata was removed from a rehab start in Bradenton due to tightness in his left quadriceps.

Bengals to decide on camp site

The Associated Press CINCINNATI — The Bengals will decide by Friday whether to hold the first few weeks of training... read more