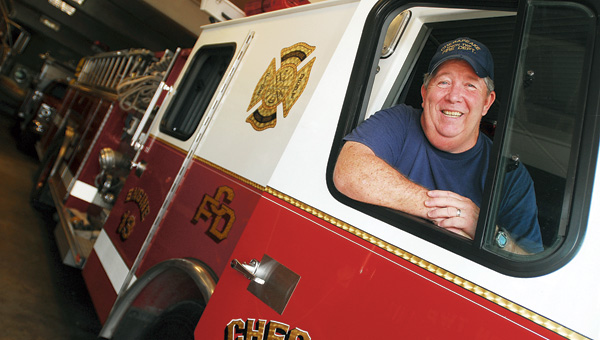 CHESAPEAKE — Ed Webb can still recall the first time he donned the 20 pounds of gear it takes to go out on a fire call.

It was about 20 years ago, on Rockwood Avenue where someone had hit a gas line. Webb had just joined the Chesapeake-Union Township Volunteer Fire Department and wasn’t sure what the ride on that fire truck would lead to. He found out vividly.

“Here was this gas meter blaring with fire,” Webb recalled. “It was kind of scary.”

Following his chief’s orders, Webb extinguished the blaze, only to discover a different kind of fire burning inside him.

Webb was hooked and he’s been meeting that unique call ever since. Now Webb is the boss of the Chesapeake department with his promotion to chief following the resignation of Brandon Best.

And his first thought to and from every fire is always his men.

“I want every fireman to go home to his family,” he said. “I want us to work as hard as we can. And I want everybody to go home, whether it is to a mom and dad or girlfriend or wife and kids. That is the goal.”

The Huntington, W.Va., native moved over to the Lawrence County side of the Ohio River 25 years ago.

“I guess now I am an official Buckeye,” he said. “I wasn’t born a Buckeye, but you can say I am a Buckeye now.”

His day job then was as an installer for the Verizon phone company, where he worked for 30 years before his retirement. Even then, going the extra mile was the natural part of Webb’s job performance.

“Anytime there was a large outage whether it was from a storm or ice, I would always volunteer to go out of town to give them back their service that was torn up by the weather,” he said. “I guess my parents brought me up to always give back to something. You will always get your reward later. It may not be a financial award, but you have helped someone else out.”

Retirement led to more volunteer work, which guided Webb to the fire department, not without some trepidation.

“I had to go through the state testing,” he recalled. “At that time, at my age, I hadn’t been in school for so long. I didn’t know how to study. If I don’t do good on the test, I will not get on the fire department.”

It was a concern that never happened. Webb gained the knowledge of how to fight a fire whether at a house or a car.

“You learn the tricks of the trade and how to be safe,” he said.

He also had to learn to cope with another part of the work — the stress factor.

“It is part of the job, but it is still hard to accept,” Webb said. “You have to understand as firemen you did everything you could. You did not fail to make the situation as good as you could. Sometimes on a fatality, there was nothing you could do to change that. Sometimes the problem was existing before you arrived.”

But the stress and danger don’t diminish the satisfaction Webb experiences when he goes out on a call.

“When you lay down your head at night, you have done somebody some good,” Webb said. “If everybody would spend one day a month to help somebody else, this place would be a lot better. And don’t expect to get paid.”

Senior levy sought for next election

Would fund local services The anticipated Collins Career Center levy, expected to be on this November ballot, may have company... read more