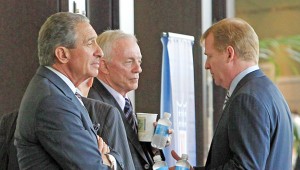 COLLEGE PARK, Ga. (AP) — NFL owners overwhelmingly approved a tentative agreement Thursday that would end the lockout, provided that players re-establish their union and sign off on the proposal. But the players didn’t vote, leaving the country’s most popular sport in limbo for at least another day.

Owners and players failed to see eye-to-eye on much of anything for months, so perhaps the way Thursday’s events unfolded shouldn’t have come as a surprise.

At about 7 p.m., owners voted 31-0 — the Oakland Raiders abstained — to OK the deal, pending players’ approval. Soon after, the league issued a press release announcing: “NFL clubs approved today the terms of a comprehensive settlement of litigation and a new 10-year collective bargaining agreement with the NFL Players Association.”

Less than an hour later, NFLPA head DeMaurice Smith sent an email to team reps saying: “Issues that need to be collectively bargained remain open; other issues, such as workers’ compensation, economic issues and end of deal terms, remain unresolved. There is no agreement between the NFL and the players at this time.”

And then the players held a conference call and decided not to take a vote, saying they had not seen the full proposal approved by owners.

Commissioner Roger Goodell spoke on the phone several times Thursday with Smith, including filling him in on the results of the vote before it was announced.

“Hopefully, we can all work quickly, expeditiously, to get this agreement done,” Goodell said at a news conference at an Atlanta-area hotel. “It is time to get back to football. That’s what everybody here wants to do.”

But several players took to Twitter, expressing opposition to the proposal. Pittsburgh Steelers safety Ryan Clark wrote: “The owners want u to believe that they have been extremely fair everywhere and this is their ’olive branch’ to finalize it.”

The four-month lockout is the NFL’s first work stoppage since 1987.

As a result of it, the exhibition opener was canceled — the Aug. 7 Hall of Fame game between Chicago and St. Louis in Canton, Ohio.

“The time was just too short,” Goodell said. “Unfortunately, we’re not going to be able to play the game this year.”

“I can’t say we got everything we wanted to get in the deal,” New York Giants owner John Mara said. “I’m sure (players) would say the same thing. … The best thing about it is our fans don’t have to hear about labor-management relations for another 10 years.”

The old CBA expired March 11, when federally mediated negotiations fell apart, and the owners locked out the players hours later. Since then, teams have not been allowed to communicate with current NFL players; players — including those drafted in April — could not be signed; and teams did not pay for players’ health insurance.

The basic framework for the league’s new economic model — including how to split more than $9 billion in annual revenues — was set up during negotiations last week.

“These things, by their very nature, aren’t supposed to make you necessarily happy when you walk out the door. It was a negotiation,” Cowboys owner Jerry Jones said. “I don’t mean to sound negative, but it isn’t exactly like Christmas has come along here.”

Final issues involved how to set aside three pending court cases, including the antitrust lawsuit filed against the NFL in federal court in Minnesota by Tom Brady and nine other players. NFL general counsel Jeff Pash said the owners’ understanding is that case will be dismissed.

One thing owners originally sought and won’t get, at least right away, is expanding the regular season from 16 games to 18. That won’t change before 2013, and the players must agree to a switch.

“We heard the players loud and clear. They pushed back pretty hard on that issue,” said Atlanta Falcons president Rich McKay, chairman of the league’s competition committee.

Goodell also announced that owners approved a supplemental revenue-sharing system, something Smith noted in his email to team reps. “Obviously, we have not been a part of those discussions,” he wrote.

Even after all acceptable terms are established, a deal would lead to a new CBA only if NFLPA team reps recommend re-establishing the group as a union, which must be approved by a majority vote of the 1,900 players.

In March, when talks broke down and the old CBA expired, the NFLPA said it was dissolving itself as a union and instead becoming a trade association, a move that allowed the players to sue the league under antitrust law. But only a union can sign off on a CBA.

“We think we have a fair, balanced agreement,” Panthers owner Jerry Richardson said.

The deal would make significant changes in offseason workout schedules, reducing team programs by five weeks and cutting organized team activities (OTAs) from 14 to 10 sessions. There will be limited on-field practice time and contact, and more days off for players.

A total of $50 million per year will go into a joint fund for medical research, health-care programs, and charities.

If the players approve the deal, the NFL would go back to the business football pretty quickly:

—On Saturday, teams can stage voluntary workouts at club facilities, and players may be waived. Contracts can be re-negotiated and clubs can sign draft picks and their own free agents. Teams can also negotiate with, but not sign, free agents from other clubs and undrafted rookies.

—On Wednesday, the league year officially begins, so free agency opens in full, and all training camps will open with a 90-man roster limit; activities that day will be limited to physicals, meetings and conditioning. All clubs must be under the salary cap.

—Players can practice without pads next Thursday and Friday.

The Associated Press CINCINNATI — On their way to their first playoff appearance in 15 years, the Cincinnati Reds did... read more