A home one piece at a time 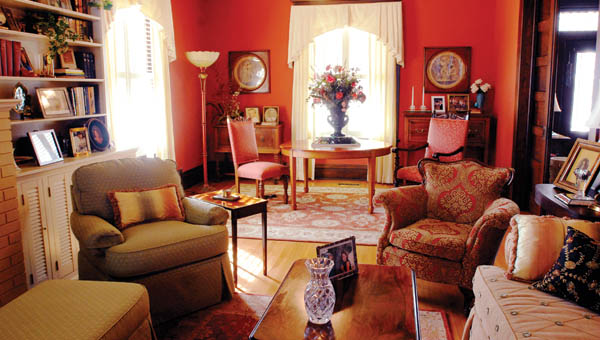 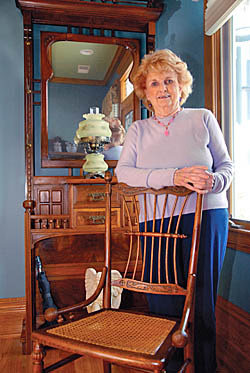 She’s put her head on Jack Nicholson’s shoulder at the Grammy’s. There’s photographic proof of that on a bookshelf in her study.

Chatted with Tammy Wynette in her bra. Wynette was in the undies, not Polly. There’s no picture of that.

Ask Pauline Oliver Judd, Polly to her friends, what celebrity she hasn’t met and she stumbles. She just can’t think of one. That’s what it means to be the matriarch of the Judd clan, known for two famous singers and an actress-humanitarian. Or in name-dropping terms, Naomi, Wynonna and Ashley.

Polly Judd has seen it all, almost. And that life is documented in the three-story house on a tree-lined street in Ashland, Ky. where she brought up her children and now welcomes them and their children home year after year.

It’s also the house she has had moved twice — once a block away from its original street. The second, which took two days and two nights to relocate, to its present site, three miles away. 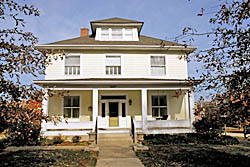 “The house is built so solid it can hold up,” she said, remembering it took her at least a week to get it ready inside. And after she did, it brought a great deal of Ashland out watching the house lumber down some of the main streets of the city.

But mostly when Judd talks about her house, her conversation showcases her ability to hit the sales and know what is of quality, what has beauty and what will last.

“More than half of the things I have have come from estate sales or are second hand,” she said.

That’s a fact she revels in.

Off a long, wide entrance hall is the combination living room and dining room that takes up one side of the house. There oak beams, interspersed with persimmon-colored plastered walls, flow upward into beams that cross the ceiling.

The dining area features an oblong walnut table with upholstered chairs. Nearby are a matching buffet and cabinet featuring delicate but intricate carvings. On one wall is a built-in dark oak china and linen closet, whose wood matches the beamed ceiling.

On the far wall are triptych-like beveled glass windows above the buffet. That glass she commissioned from Ashland artist, Cathy Painter, who did all the stained or specialty glass in the house.

“I like things that have a nice flow to them, good color and enough detail to make it interesting, but not overwhelming,” Judd said.

At the other end of the living area is a Hepplewhite chest with a small oval dining table tucked away in a front alcove, ready for cozy suppers.

On the other side of the entrance hall is the only downstairs bedroom, which features the palette combination of willow green and peach in striped window coverings and matching pillows on the bed. That peach shade is picked up in the slipper chair tucked away in a corner of the room.

Down the hall is an oversized bathroom with the original gray-white ceramic tile.

“It was unusual to have a bath downstairs,” Judd said.

The house was built around 1910 and had been the home of her in-laws when she moved in with three of her four children: Naomi, 4, Brian, 2 and Mark, 3 months. Daughter Margaret would round out the Judd clan.

After the last time she relocated the house, Judd renovated her kitchen and added on a wing where a study/family room can be found.

In this room is proof that nothing is ever safe from the discriminating eye of Judd the collector.

The room’s stained oak antique fireplace came out of the 100-year-old Berger family house Judd tore down for the lot where her home now stands. On one side is an entertainment center and on the other a bookcase, both stained to match the antique mantle and duplicating the carving.

The hearth is made up of a conglomeration of fireplace tiles she has collected.

“It comes from various houses I’ve torn down,” she said. “I salvage the tile.”

A bath off the family room has a pink, oblong marble sink that also came from the Berger house and still is in pristine condition.

“I think these things have more character, the style is more appealing,” she said. “Maybe I was born too late.”

The kitchen showcases handmade willow green cabinets with wood faces in a herringbone texture. Inside the lighted cabinets are lazy Susans that pull out, making sure anything wanted is there at hand.

A green marble island flows down to a semi-circle table that she had specially made because, as she jokes, it is the right size for her five-foot frame.

“I don’t want stools,” she said. “Not being very tall, this is my snack table.”

After the last move she pulled off the kitchen’s drop ceiling and put in recessed circular lights. She insisted that one of the gas pipes that once fueled the indoor lighting remain in the ceiling.

“That authenticates that it had gas lighting.”

On the second floor are four bedrooms and a spacious pink and black bath, including the garden room where Naomi prefers to stay when visiting Judd. There is a teal-lacquered bedroom suite Judd bought from an area antique shop just at the right time.

“I had lusted after it and when she went out of business, she gave me a price I could afford,” she said.

Draped over the vintage four-poster beds are bedspreads she found at Kmart.

“I like them and they suit me just fine,” she said. “And this little chest, this came from Value City.”

At 83, Judd says she is at the point where she can enjoy all the work, all those trips to estate sales and antique shops that it took to create her home.

“This has taken me 60 years,” she said. “It is better now than never. I feel blessed that it has worked out. It takes time. So many people don’t have the time. I took the time. I just keep stuff and keep it and keep it some more.”

And just what was it like to snuggle up to Jack Nicholson?

“He was very nice, friendly. Just like you see. I just love that picture. He is just like Wy. She is just like she is on stage and like you would expect her to be.”

CATLETTSBURG, Ky. — It’s a rainy early morning and Dianne Clement has settled in at her Catlettsburg Refinery office. She... read more