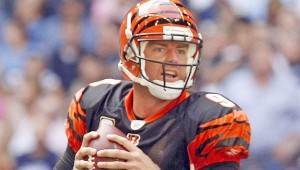 Quarterback Carson Palmer wants to be traded or says he will retire, but Cincinnati Bengals’ owner Mike Brown has no plans to deal his starting signalcaller. (The Ironton Tribune / MCT Direct)

CINCINNATI — Bengals owner Mike Brown insisted on Tuesday that he won’t trade quarterback Carson Palmer, who wants to leave one of the NFL’s least-successful franchises.

Palmer, who has four years left on his contract, told the team in January that he would retire if he’s not traded. The Bengals have only two winning seasons in the last 20 years, one of the worst stretches of futility in league history.

Brown said the club will move on without its franchise quarterback. The Bengals plan to hold their first training camp workout Saturday in Georgetown, Ky.

“I honestly like Carson Palmer,” Brown said. “He was a splendid player for us. He’s a good person. I wish him well. And he is retired. That is his choice. … I’m not expecting him to be back.”

Asked why he wouldn’t trade Palmer and get some draft picks in return, Brown said it was a matter of principle.

Brown has traditionally taken a hard line on players trying to leave. Receiver Chad Ochocinco unsuccessfully lobbied for a trade three years ago, but Brown refused. Ochocinco has one year left on his deal, but is hoping to be released in the next few weeks.

Brown and coach Marvin Lewis declined to say anything about Ochocinco on Tuesday other than that he’s under contract. The Bengals picked receiver A.J. Green in the first round of the draft, giving themselves his eventual replacement.

The Bengals drafted Andy Dalton in the second round last April. Brown indicated on Tuesday that he’ll be the starter heading into camp, even though he hasn’t been able to work with coaches because of the NFL’s lockout. Jordan Palmer — Carson’s younger brother — is the only experienced quarterback on the roster.

Brown said the team will look for another veteran, but will give Dalton a chance to win the job.

“We think he is promising for our future,” Brown said. “Yes, he’ll have teething problems. It won’t be altogether easy for him all the time. But we’re going to put him in there. If he can do it, we’re going to go with him. And I hope he can manage it.”

Dalton arrived at Paul Brown Stadium in the afternoon, accompanied by an assistant coach, and went inside for meetings.

The Bengals are coming off a 4-12 season that included 10 straight losses. Carson Palmer told the team he wouldn’t be back after Lewis decided to return even though Brown promised no significant changes in how the organization is run.

The Bengals originally planned to have players report at Georgetown College — a 90-mile drive south of Cincinnati — on Wednesday and have their first practice a day later. They pushed the schedule back by two days.

Players will have physicals at the stadium on Thursday and Friday morning, then report to Georgetown on Friday afternoon.

Players visited the stadium throughout the day, getting playbooks and meeting briefly with coaches who were busy trying to contact college free agents. Cincinnati has one of the NFL’s smallest front offices, making a hectic time even more challenging.

“It’s been a crazy day,” offensive line coach Paul Alexander said. “In fact, all the linemen came through and I was able to spend about one minute with each guy and then, ‘Get out of here, I’ve got to go try to sign some college free agents.”’

Brown, who functions as the team’s de facto general manager, was pleased to have everything up and running again.

“We’re like Snow White and the Seven Dwarves — ‘Heigh-Ho, Heigh-Ho!’ — with the spirit over there today,” Brown said.