PROCTORVILLE — The flag at the Proctorville Village Hall is now at half staff in honor of the man friends and colleagues said had the village at heart at all times. 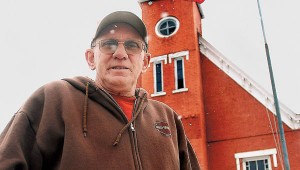 “He was a very effective mayor,” Dale Burcham, village councilman and acting mayor, said this morning. “He loved Proctorville. Up until the time he got sick he had a senior dinner every month and paid for it out of his own pocket. He loved the people. He always wanted to be mayor.”

Each Christmas Stapleton would buy toys for the children in the village whom he knew wouldn’t have presents, according Pam Legg, assistant administrator for the village.

“I have known Sam for 18 years,” Legg said. “He had a very big heart. He is going to be missed. He has left a big empty spot in Proctorville.”

Stapleton, who grew up across the street from Burcham, was elected mayor about four years ago. The Air Force career man and postal service retiree had served on village council off and on for 10 years before he won the mayor post in the November 2007 election.

“I was a hands-on mayor,” Stapleton said earlier this year in an interview where he reflected on his time in office. “I wasn’t there once a week. I was down there every day.”

When Stapleton came into office, his top priority was to address the problem of the absentee landlords, which left the village dotted with dilapidated, rundown houses. With Stapleton reaching out to the Ironton-Lawrence County Community Action Organization slowly those eyesores are going away.

“We cleaned the village up,” he said at the time. “We got these old houses torn down. The most important thing is to have a clean community. I will put Proctorville against any other as the cleanest.”

“I thought Sam was an effective administrator,” Gilpin said. “He did a lot for Proctorville. He helped me a lot when I became mayor.”

After several weeks of discussion, the Ironton City Council Thursday will hear the first reading of an ordinance that would... read more