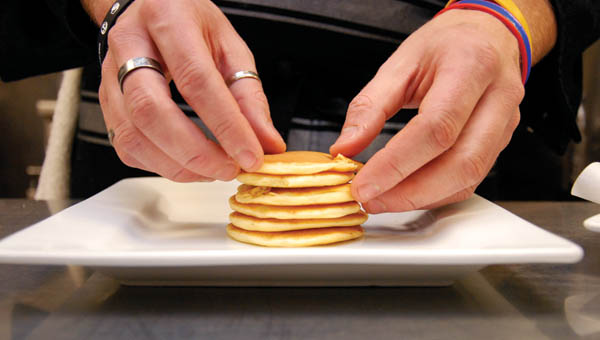 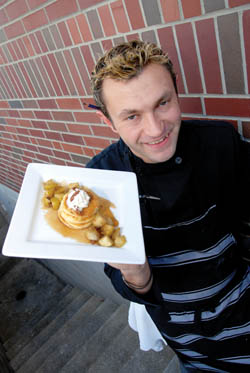 Chef Chris Ross, of the Bellefonte Country Club, shows off a plate of his Sunday Morning Apple Flapjacks.

BELLEFONTE, Ky. — A country boy growing up in Beattyville, Ky., young Chris Ross was already near the stovetop watching his Papaw pat out a batch of hamburgers. He could hardly wait for them to get done.

“I can still remember the way they taste,” sighed the now-executive chef, licking his lips, recalling chomping on this down-to-earth chow.

Ross, now 33, heads-up the Bellefonte Country Club kitchen, but calls upon his home team of sous chefs for a tasty recipe of support and achievement.

You might’ve recalled his Valentine’s Day foodie proposal in The Tribune to Asia Bends. The couple’s nuptials are set for July 9, 2011, a Victorian French-themed event with a reception following at the club. Though Ross won’t reveal the thoughtful menu just yet, he’s already stirring up a platter that will make guests scream, “Ooh-la-la.”

With a pinch of love and dash of organization, 27-year-old Bends blended her family with Ross’s after the engagement. Together, living in Russell, they’re enjoying their busy lifestyles raising Chris’s son, Brady, 9; and Asia’s children, Elijah, 7, and Brooklyn, 5.

Ross admits it was initially a challenge for little Brooklyn and Eli to get used to his gourmet cooking.

“They were used to foods any average single mom would have given, like fast foods and convenience foods that are high in fat and calories. So it took some adjusting.”

Even then, Ross doesn’t think these kid-friendly foods like chicken fingers, French fries, or pizza pie are as bad as made out to be — if eaten in moderation. He tries to make their greasy favorites healthier in his family kitchen by asking the kids to bread white meat chicken breasts. He slices fresh Idahos for deep-frying.

He also exposes his little ones to fresh fish, veggies and alternative starches like risotto and polenta.

“If it tastes good and doesn’t look too weird, kids should eat it.”

Though Ross is hard-at-it in his chef day-job, he loves the quiet time in their home’s kitchen. Sometimes he even brings Brady or Eli to work, giving them easy jobs like washing vegetables or mixing sauces.

“They’ve both also worked in the dish-tank where every aspiring chef starts out, teaching them to work from the bottom up,” laughed Ross, adding Brooklyn’s still young for a cookery career, but helps at home scrambling eggs or stirring the pots.

It’s Ross’s mission – both at Bellefonte Country Club and at home – to see more children on food prep duty. It’s fun, educational, and leads to healthier eating. He hosted a “Kid’s Chef Camp,” and more are in the works in coming months.

It sure seems tiring, steaming and boiling at work all day, then coming home to cook again. But Ross and Bends do their best through their frenzied schedules to prepare weekly family menus and supermarket shopping lists – just as in the restaurant. Ross offers tips:

“We don’t make more than what the family will eat and we freeze any leftovers to use them in the menu the next week,” he went on. “We make the menu using what’s on sale that week at the grocery stores, and don’t skimp on quality ingredients.”

The growing family’s started several traditions since they merged. There’s “fancy food Friday” where gourmet food fare is introduced to the children. On Soccer Saturday they stay-up late after Ross gets home from work at 9:30 p.m. He grills burgers and wedges potatoes for fries, then watches soccer matches with the kids.

“It’s really good practice for the cooking competitions, besides the fact that I just love a challenge,” smiled award-winning Ross, who won the 2010 Summer Motion festival’s Chef’s Competition, going head-to-head with his mentor Chef Scott Sutton. He also took top billing at the Club Manager’s competition in 2008 and 2009. He was awarded the bronze at the 2010 contest.

Even though they try new ingredients, the family always asks for their most wanted meals. Having an executive chef in the house is a perk. Asia loves fried eggs and toast topped with strawberry jelly, while Eli crunches tacos, and Brooklyn enjoys “cheese eggs,” an unfussy term for a cheese omelet.

Fiancée Asia, who Chris calls “Pookie,” cooks what the family dubs a “puppy burger,” described Ross, saying she affectionately nicknamed him “Puppy” in turn, but now Eli and Brooklyn call him that too. The sandwich seemed to fit the adoring family perfectly.

His own son turned his back on dear old chef dad, choosing his soon-to-be stepmom’s homemade dinner as best in the house.

“Brady likes Asia’s spaghetti the best. It’s honestly better than mine,” Ross said with a chuckle.

Having Bends beside him is a secret ingredient to success. She stays involved with his career.

“She makes my job more fun and satisfying. She’s supportive and pushes me to better myself. She keeps it all together for me. I love her so much,” Ross doted.

Each year as the yuletide season approaches, Ross spends more time in the workplace with varying Christmas parties and events. He’s sure to be away from family more, but will find a way to juggle it all — with lots of coffee.

With handy kitchen pantries and cupboards, cooks are quickly out the door and on their way to evening school events and practices.

“I always try to be a part of all of my kids’ school activities. I’ve made it to every school party and function; I help them with art projects; I coached Brady’s cross country team, and Brooklyn and Eli’s soccer teams, and I’m getting ready to start assistant coaching Brady’s basketball team.

“Asia tells the kids I love and miss them when I have to work late, and helps them understand about how it’s my job and I have to be there. She’s the backbone of our family and I wouldn’t be successful without her. …It’s about finding the balance between family life and my career.

“It’s hard to be everything to everyone, and trying to be in a million places at once, but I’ve found a good balance between the two,” Ross heartened.

These family memories stir him to shake up the menu, bringing taste and joy to diners through his cuisine. He whisks the menu four times a year as new seasons awaken.

“I am a people-pleaser by nature, so seeing people enjoy my food gives me great satisfaction. I draw my inspiration from places I’ve eaten, foods I always enjoy, and current food trends.”

Ross is reaching for his goal:

“To continue to grow, learn, challenge myself, and be the best chef and father that I can be.”

Ross began his career at Bellefonte Country Club in 1995 waiting tables. There, he met Sutton who served as executive chef at the time. He encouraged Ross to cook and enroll in Sullivan University in Louisville. In culinary school he worked at a Cajun eatery, hotel, and two country clubs in the area. After graduating from Sullivan in the fall of 2000, Sutton offered Ross a sous chef position, where he remained until 2005 when he was promoted to his present top chef gastronomic post.

Ross said it’s rare for chefs to stay in one place for so long. But he loves working at Bellefonte.

“I enjoy pleasing people, so it’s an exciting challenge to constantly reinvent myself in order to stay new and exciting with the same clientele,” he paused. “I’m constantly striving for perfection and I try to stay up-to-date with current food trends. I love to cook and to teach. It keeps me motivated.”

But ask Ross what his best compliment is. It comes from three sweet kids – right after they join the clean plate club.

“They always say, ‘It’s the best dinner ever.’”

Directions: Remove core and cut apples into a small dice. Place the apples in a small bowl and toss with the lemon juice to keep them from turning brown. In another bowl, beat eggs, vanilla extract, and milk until blended. In a small bowl, mix flour, cornmeal, baking powder, salt, and sugar.

Using a rubber spatula, stir the dry ingredients into the bowl with wet ingredients. Stir in melted butter and half of the diced apples. It will be lumpy. Don’t beat the batter – it will make pancakes tough. Cover and refrigerate for 30 minutes before cooking.

Cook as you would any pancake recipe, controlling the heat of the pan. If the pancakes brown too much, reduce heat. If they don’t brown at all, turn up heat slightly. Use a non-stick pan or griddle. Pour the batter using a large tablespoon. When it bubbles up and looks dry, flip it. Brown the other side slightly.

To serve, heat maple syrup and stack-up a couple pancakes. Top with syrup. Garnish with chopped apple. For a fun addition, add pecans to the maple syrup while you are heating it up and dab on whipped cream. The recipe would also make a tasty brunch dessert.

The man behind the lens

It starts with the imagination where fantasy runs riot and everything seems possible. Then when Michael Adkins has an idea... read more