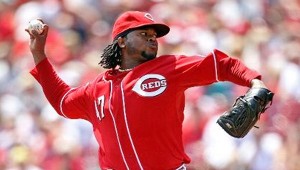 Baker asked Cueto to aid his tired bullpen by throwing a complete game. Cueto agreed to do it.

“Dusty asked me for a complete game this morning. I said, ’I will”’, Cueto said.

Cueto pitched a three-hitter, Joey Votto added a three-run homer and tied his career high with five RBIs and the Cincinnati Reds completed a three-game sweep of the San Francisco Giants with a 9-0 win on Sunday.

Todd Frazier hit his first career home run and Drew Stubbs had a career-high four hits as the Reds rebounded from being swept by the New York Mets in four games to post three consecutive wins for the first time since sweeping the Los Angeles Dodgers June 13-15.

Cueto (7-4) missed the first month of the season with irritation in his upper right arm and needed 7 1-3 innings to qualify for the National League ERA lead. He went into the game with a 1.88 ERA and lowered it to 1.72 with his first shutout since beating Pittsburgh 9-0 with a one-hitter on May 11, 2010.

Cueto’s complete game was his third of the season, but he lost the other two. Cueto had one walk with six strikeouts while allowing just one baserunner past first base.

“I have been working on my mechanics,” said Cueto, who has added an exaggerated body turn to his delivery. “I wasn’t turning as much today. The three-run lead helped too.”

The New York Mets and extra-innings games took a toll on the Reds’ bullpen.

“We were swept by the Mets and came back to sweep the Giants,” Baker said. “Johnny gave us what we needed. He was masterful. He works hard. He competes. You see him out running line to line. He didn’t get any hits, but works on his hitting and bunting. He is trying to be a better base runner.”

San Francisco left-hander Barry Zito lost his third straight after a stretch in which he won three in a row as the Giants were swept for the fifth time this season and first since losing three straight at Oakland June 17-19.

For the second consecutive game, the Reds grabbed a first-inning lead. Stubbs, Edgar Renteria and Votto all singled to produce one run. After Zito’s wild pitch, Brandon Phillips hit a sacrifice fly, and Jay Bruce singled up the middle for a 3-0 lead.

Baker gave Votto a day off Monday and the reigning MVP responded. He is 10 for 25 since with four home runs and nine RBI.

“Joey’s been swinging the bat better, Jay Bruce picked up some RBIs,” Baker said. “They are doing the things we’ve been talking about with runners in scoring position.”

The Reds led 5-0 after the first inning on Saturday.

Frazier, in the ninth game of his career and eighth after being recalled from Triple-A Louisville on July 22 for the second time this season, hit a 1-1 pitch from Zito 368 feet over the left field fence for a 4-0 lead with one out in the fourth inning. The Reds made it 5-0 on Bruce’s sacrifice fly in the fifth.

Frazier picked up three baseballs this week from his first hit, RBI and home run.

The Reds broke it open in the seventh on Votto’s 414-foot, three-run homer to center field on a full-count pitch from Guillermo Mota.

The Reds capped the scoring with Stubbs’ double and Votto’s RBI single in the eighth.

The sweep came after veteran Miguel Cairo challenged his teammates to do the little things after the loss to the Mets on Thursday afternoon.

The speech left an impression on the rookie Frazier.

“I look up to the veterans on this team. Like Miguel was saying the other day, we’ll be OK, when we put it all together.”

NOTES: San Francisco optioned rookie SS Brandon Crawford to Triple-A Fresno before the game to make room on the roster for newly acquired SS Orlando Cabrera. … After their six-game road trip, the Giants return home for their second 10-game homestand of the season. After the first of their two 10-game homestands, the Reds leave for a six-game trip to Houston and Chicago. … Phillips extended his hitting streak to 10 games (15 for 42, .357), the team’s longest current streak. … Carlos Beltran’s seventh-inning single snapped a stretch of 11 consecutive hitless at-bats. Beltran is 2 for 17 in four games with San Francisco.

The Associated Press Michael Bourn went from the bottom of the NL Central in Houston to the top of the... read more