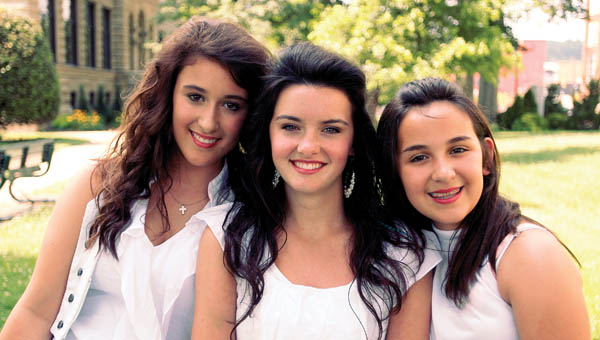 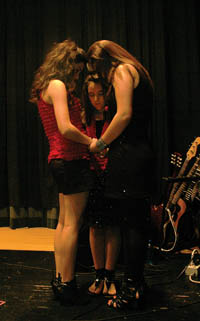 Sitting across the table from 4Mile members Abbey and Anna Claire Kimball, sisters, and their cousin, Casey Underwood, one might assume they are just three regular teenage girls.

But along with being 4.0 honor students and school athletes, these young ladies are also musicians, vocalists and songwriters who just released their second CD in April.

It was Christmas of 2007 when the girls first received their instruments as gifts. Later that summer when they heard of a Tri-State Idol contest at Pullman Square, they decided to send in a video and enter.

“We were so excited,” said 14-year-old Abbey Kimball. “While we were learning the song we were also learning to play our instruments at the same time.”

Yes, learn their instruments. The girls are self-taught on their instruments by watching instructional YouTube videos and a few lessons by Terry Kimball, father of Abbey and Anna Claire. They have had no formal training. In a few short months the girls learned to play their instruments and made a video of the band singing “Leave it in Pieces.”

Imagine their surprise when they beat out several established bands, moving on to the finals and giving their first public performance on July 4 at Pullman Square.

Calling themselves 4Mile, named for the road they live on, the band has been playing ever since.

Music is Love: The first album

With Abbey Kimball on electric and acoustic guitar and vocals, 17-year-old Casey Underwood on bass, 12-string acoustic and piano and drummer Anna Claire Kimball, 10, who also plays the violin; the band continued to perform at venues such as the Ohio University Southern Campus’ Brown Bag Concerts. Casey Underwood said people who saw them perform at the concerts would also ask them to perform elsewhere. The band’s first major performance was a concert at Chesapeake Middle School where they raised more than $3,000 for charity. Approximately 1,000 people packed the middle school gym to hear the band perform. The concert was also the setting for the debut of the band’s first CD “Music is Love.” The band wrote all the songs on the album which was recorded as a school project for the students at the Collins Career Center. Under the direction of teacher Caleb Jones, the girls said they learned the ins and outs of recording a CD.

“It was weird and at the same time, I was proud of all the hard work.” Casey Underwood said of hearing their CD for the first time. “You always critique yourself so much.”

Last summer, 4Mile were the winners of the Battle of Bands at the Lawrence County Fair, earning them a gig opening for Jamey Johnson. Last fall, the band won another contest to perform at the Party on the Plaza at the Big Sandy Superstore Arena opening for country music star Miranda Lambert.

The girls said they are really thankful to all their fans that support them.

“They won because of all their friends and family who stayed up and voted for them,” Robin Kimball said.

The bands’ other performances have included opening at the Huntington Outdoor Theater (HOT) and performing during the Relay for Life.

In addition to school, sports and performances, the band found time to write, compose and record their second self-titled CD, which was released in April 12. According to the band, this edgier CD offers something for everyone, with a big variety of sounds including ballads, pop and some rock.

“We had an idea of what we were gonna do [on this CD],” Abbey Kimball said. “It’s more mature. The songs have deeper personal meaning and there is more roundness to each song.”

Abbey’s favorite song on the album is “Near Not Far.” She said the song is about personal things she has been through and singing it makes her happy because it’s a fun song.

“Yeah, Fast Lane is our rocking out song,” Underwood agrees while smiling at Anna Claire.

For their second CD, the girls worked with local musicians Jeff and Julie Westlake. The Westlakes’ metal band Hydrogen has a huge following in the United States and Europe. Jeff Westlake, who produced 4 Mile’s second CD, said the girls put in tremendous amount of work on the album.

He meets with the girls at least twice a week and they also work with his wife, Julie, on vocals. Westlake said Abbey Kimball wrote about 12 songs for the album (they used nine for the CD) in a short period of time.

“From mid-September until January, Abbey wrote an entire album from scratch,” he said. “I didn’t touch them. They were that good.”

A song written by Casey Underwood closes the album. Underwood, who just received a piano for Christmas, taught herself to play and brought the song to Jeff as he was finishing the album.

“It’s one of those songs that makes the hair on your arms stand up,” he said.

The future of 4Mile

In addition to the release of their second CD, the band was recently chosen by the Planetary Group; an artist marketing firm based out of Boston and LA that will shop their CD’s around to radio stations (throughout the country) to get the band more exposure. This is an exciting opportunity for the band, Abbey Kimball said, because the firm is very picky about the bands they choose to market.

It is an exciting time for 4Mile and their families; a love of God, music and giving to others has become a real family affair. Robin Kimball, Abbey and Anna Claire’s mom; Angie Underwood, Casey’s mom; and Terry Kimball all work with the band and help out with graphic design, artwork and management of the group. According to Westlake, the total and absolute support of the girls’ families is amazing. However, he notes, they also always step back enough to let the girls be their own person.

“Each one of the three is amazing in their own right. When you put them together, it’s amazing,” Westlake said of the band.

The girls, who attend Union Missionary Baptist Church in Chesapeake with their family, said they believe God gave them the talents they have and that they always try to be a good example to others including their younger fans. The band donates the majority of the money they receive to charity.

“We want to be a good example for the younger people,” Casey Underwood said. “And we always want to glorify God.”

When asked if they thought there would be a third CD on the horizon, the girls looked at each other and smiled.

“Well, I’ve written a few songs,” Abbey Kimball said. “After the release of our second CD, we’ll probably put some more songs together.”

Huntington artist has flair for ‘deceiving the eye’ with beauty

The petite blonde with the laughing eyes seems too diminutive to be able to carve massive 10-foot-tall columns out of... read more