Huntington artist has flair for ‘deceiving the eye’ with beauty 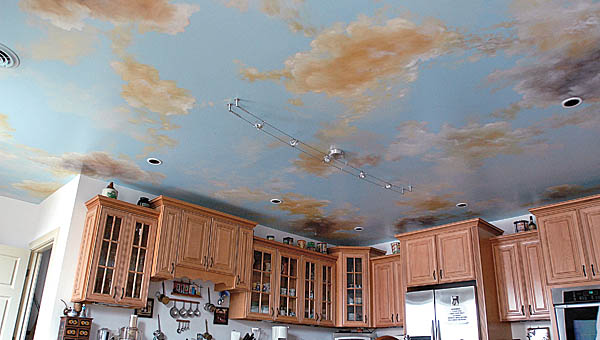 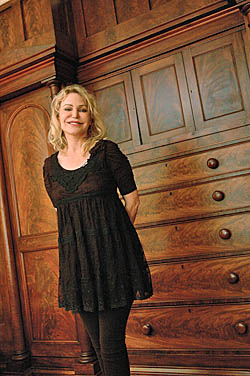 The petite blonde with the laughing eyes seems too diminutive to be able to carve massive 10-foot-tall columns out of marble. And, the fact is, she can’t. But with a paint brush and some artistic legerdemain Beverly St. Lawrence can create an illusion of cold stone so real, you expect to chill at its touch.

It is what it means to be a master of the trompe l’oeil. That’s a jazzy French word that translates to “deceiving the eye” and means you can make something seem like what it’s not.

“Whatever I can see, I can copy it,” St. Lawrence said.

Her Huntington, W.Va. house is a three-dimensional portfolio of what talent, taste, a sharp eye, steady hand and the ability to balance on scaffolding can do.

Take the right-angle staircase that climbs up the south wall of her 1900s two-story brick house. Once the walls supporting it were dull off-white plaster. But today, the staircase is surrounded by chunky blocks of sandstone so realistic Queen Elizabeth would think she was back in Windsor Castle. All done with brush, caulking and a lot of patience. 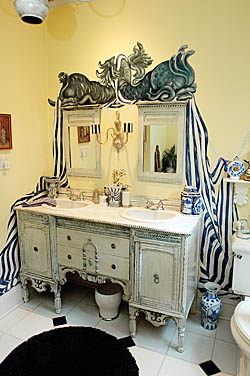 Mini murals and stained glass landscapes turn a galley kitchen into an oasis. Even a discarded baby grand piano got chopped up so it could adorn a built-in breakfront. And don’t forget to look up, for everywhere wispy clouds dance across ceilings of robin blue skies.

St. Lawrence was only a third grader at a Catlettsburg, Ky., school when her visual talent started showing up.

“My teacher asked me to do a winter mural so she must have noticed I had some ability at that age.” she said. “I could copy things. I was very creative.”

She took that love of drawing and painting and did what she thought was the next step by majoring in art at Eastern Kentucky University. In her sophomore year she moved over to Lexington to study at the University of Kentucky. “But I was not happy with the art department,” St. Lawrence said. “I was more of a realist. They were pushing putting splashes of paint on things, where you just throw on the paint. I just got discouraged.”

“I took the wrong direction,” she admits now.

And it was a while before the muse brought her back to the creative path. When it did, she began painting again, if only for herself.

“I started doing sketches of my children,” she said. “I started playing in that again. It was really a part of my life, but I was struggling.”

Struggles led to divorce and the reality St. Lawrence had to support herself. She reached out to what was familiar.

“I knew I had made a wrong career choice,” she said. “I was 42 years old and I realized my life had passed me by. I was supposed to be doing something different with my life. I felt empty in my life. What was my meaning? What was I supposed to be doing? I would hear a soft, still voice saying ‘I have given you everything you need in your hands.’”

Soon an opportunity opened up for St. Lawrence. In 1994 a Huntington-based non-profit was sponsoring a Decorator Showcase as a fundraiser. The choice of the house was fortuitous for St. Lawrence. It was the Ritter Park home of her brother-in-law, Chuck Lawrence.

“Would you like to take a room and decorate?” she was asked.

The room nobody wanted was the large foyer in the house.

“No one wanted to work with me because they knew I was a novice,” St. Lawrence said. “They said ‘She can’t do it.’”

Vacillating between trepidation and determination, St. Lawrence cast about for a design idea to prove wrong the naysayers.

“I said I can picture something on your ceiling — A grand master work of art,” she said. “I had this old family Bible. I opened it and saw this beautiful Rembrandt angel.”

Stretched out on scaffolding dangling below the foyer ceiling, St. Lawrence slowly began to create.

For three weeks, she painted tediously stroke after stroke until a 6-foot by 6-foot mural of an angel appeared through a ceiling of storm clouds.

“It was an epiphany for me,” she said. “It was a spiritual searching for me. … a life-changing experience. I was led by an angel from a book.”

Today St. Lawrence’s resume of commissions parallels the revitalization and restoration work of many Tri-State landmarks and beyond. There is the Old Main mural inside that historic office building on Marshall University campus. Showcase houses glow with her signature tissue paper wall treatments. Catlettsburg floodwalls are canvases for her mural of famed Kentucky author Billy C. Clark. And much of the restoration work done for entrepreneur John Hankins in Huntington.

Thousands and thousands of square feet of paint transforming spaces into fantasies, all derived from talent and a belief in oneself.

“It’s been a gratifying journey,” she said.

She goes at life like a dynamo that can’t wind down. Community activist. Career woman. Wife. Mother. Devoted Christian. Everything... read more