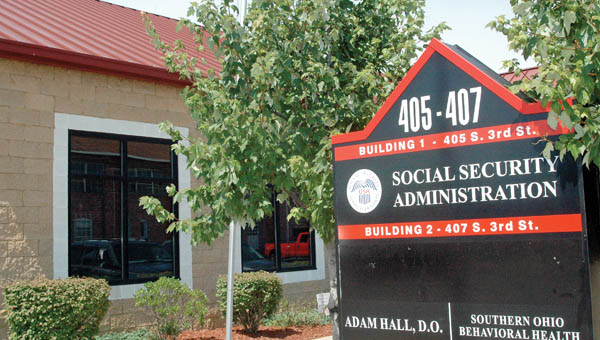 The Ironton SSA office, located at 405 S. Third St., has closed and its employees will work at other area offices until the new facility, located at 611 Vernon St., is completed in November. The building began construction in September 2010.

More than two years after union members started rallying to have the Ironton Social Security office shut down for mold problems, the agency announced Monday that the office would close until a new facility could be completed.

The SSA issued a press release Monday stating that the Ironton office, located at 405 S. Third St., will be closed and its employees will work at other area offices until the new facility, located at 611 Vernon St., is completed in November. Construction was begun in September 2010.

Members of the American Federation of Government Employees Local 3448 had been at odds with SSA and General Services Administration, which acts as the federal government’s real estate manager and leases space for the SSA, since employees in the office discovered mold in the summer of 2009.

Neither the SSA nor GSA denied that mold exists in the facility, but the debate was whether the mold was causing an unsafe work environment for employees and posing a danger to the public.

Both agencies claim that various rounds of testing to determine if the mold posed a risk for employees or the public seeking services at the office were negative.

Carmen Moreno, regional communications director for the SSA, said the closure comes after the discovery of new mold found in the office about a week and a half ago and is an act of an “abundance of caution.”

“When we were notified, we immediately had it tested and it came back no danger to health,” Moreno said. “We were asked to put a protective shielding over it. At that point, we had said, had their been any additional growth, we would revisit what we were going to do at the office.”

Moreno said the SSA felt the best way to address the issue was to close the office until the new facility was completed, having employees work at other area offices in Portsmouth, Gallipolis, Huntington, W.Va. and Ashland, Ky. in the mean time.

Rick Hanna, vice president of the AFGE, said the union was notified Friday evening of the closure.

“This is a great, great win,” Hanna said. “The big thing is, we’re getting them out. They are going to offices that are closest to them. The agency is also paying for any additional expenses and time it’s taking them to get to the other offices.”

Although the union is celebrating the closure as a victory, they are still questioning why it took the SSA more than two years to take action.

David Sheagley, president of the union, said in a press release that was issued Monday, the mold was not a minor issue.

“Employees at the Ironton Social Security office have had to work in a building infested with mold for more than two years, and many have developed eye, throat and respiratory irritations, Sheagley said in the release. “We’ve been fighting with SSA management to get this facility shut down for two years. Although we are pleased the agency has taken notice, it’s a travesty that employees have had to suffer through two years of breathing mold-infested air due to inaction by SSA leadership.”

In June, Sheagley and Hanna visited the office and filed a group grievance. Previously, nine out of 11 union workers filed individual worker’s compensation claims due to the mold. They also encouraged employees to file presidential inquiries on the White House website.

The union also sought help from Sen. Sherrod Brown, who also issued a press release about the closure.

“No Ohioan should have to risk health and safety simply by going to work each day,” Brown said. “It’s unacceptable that workers in Ironton were forced to wait this long, but I’m relieved that we’re finally seeing action from the SSA. I remain committed to seeing the timely completion of the new Ironton office and will continue to keep up the pressure on the Obama Administration to ensure safe conditions for the employees and the public.”

Until the new office is completed, Moreno said the SSA is working on finding a location in Ironton that can address concerns of those that can not travel to other office locations.

“We are looking for a place in the Ironton community where we can have very, very limited Social Security services offered, just to address that population that maybe doesn’t have cars.”

Moreno said the services offered would mostly likely be referrals, to ensure that individual’s information is kept safeguarded.

Ironton residents wishing to apply for benefits, sign up for direct deposit, replace a Medicare card, obtain a proof of income letter or change an address or telephone number may do so at www.socialsecurity.gov or by dialing calling 1-800-772-1213 (TTY 1-800-325-0778).

Lawrence County officials are waiting to hear if two suspects in last week’s burglary and police chase will be extradited... read more