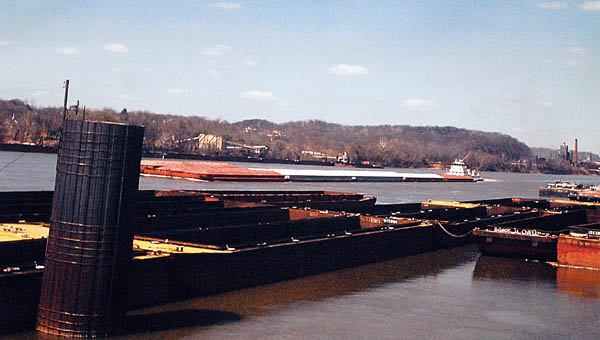 A photograph of the barges on the Ohio River on display during an Ohio River Summit Tuesday at Ohio University Southern.

The Ohio River along with its economic opportunities and advantages was the focus of discussion at a public forum Tuesday at Ohio University Southern.

Several state and local officials were on hand at the Ohio River Summit, which was sponsored by the Ohio House of Representatives and the Lawrence Economic Development Corp.. The three-hour forum also included public testimony and discussion from area businessmen, county and city officials and others.

The goal of the meeting, LEDC executive director Bill Dingus said after it was over, was to draw attention to the potential of the river, something people sometimes take for granted. He added that a long-term goal is to unite the legislators who have districts along the river so they’ll keep the river in mind when it comes to deciding issues such as fuel tax and freight weight limits, which ultimately affect commerce on the river.

Many businesses that depend on the river — Dow Chemical and American Electric Power for instance — provide high-paying jobs to people in the region, Dingus said. Not only that, but the river provides a less expensive and greener way of transporting commodities, he said. S row of 15 barges can transport as much as 1,000 semi tractor-trailer trucks, Dingus said.

Rep. Terry Johnson of the 89th District spoke about the need to work across county and state lines to promote business and commerce on the river. The State of Ohio has neglected the river’s potential, Johnson, a native of Scioto County, said.

“We need to start looking at that river as a regional asset,” Johnson said.

Sen. David Daniels of the 17th District, spoke about the effect that the river has on employment rates. While the unemployment rates are up as a whole through southern Ohio, the rates are slightly down in Lawrence County, Daniels said. He added the reason for higher employment rates in the county is, in part, the river.

Besides Johnson and Daniels, Rep. John Carey and a representative from Sen. Tom Patton’s office were present and spoke at the summit.

Ted Lozier, chief of the Ohio Department of Natural Resources division of soil and water resources, spoke about the quality of life that the river provides to the area.

The watershed of the river includes 204,000 square miles. The river provides drinking water to more than 3 million people, Lozier said.

In the Ohio River basin, 6 percent of the nation’s energy is generated, he said.

The river’s locks and dams need improvements and replaces, Lozier told officials, later adding that those improvements could cost tens of billions of dollars.

Bill Dickens, economic director for the City of Ironton, spoke about Ironton’s history. The city was founded as a river city to supply charcoal for furnaces that lined the hills in the area. The city was recently awarded $1.5 million in Clean Ohio Funds to contribute to the development of its riverfront property, he said. Another $1.2 million in grant money is expected for the construction of walking trails, he said.

“This is what we need to draw people across the river to Ohio,” Dickens said.

COAL GROVE — The Coal Grove Betterment Club and the village council said thanks to some folks that have helped... read more