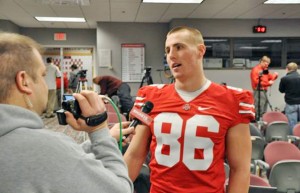 COLUMBUS — Freshmen who never played a game for Jim Tressel showed support for the former Ohio State coach by wearing bracelets with “JT” on them when the players briefly met with reporters Wednesday.

“A lot of the guys have them,” tight end Jeff Heuerman said.

Tressel was forced to resign May 30 after the university discovered he broke NCAA rules.

The Buckeyes open fall camp this weekend, with the freshmen reporting Saturday and the upperclassmen on Sunday.

Joel Hale, a defensive lineman from Greenwood, Ind., said he still stays in touch with Tressel even as he looks forward to playing for interim coach Luke Fickell.

“With the transition in coaches, it affected me but it never changed my mind about being a Buckeye, not at all,” he said. “I still call up coach Tressel every now and then, just to see what’s up.”

Asked what Tressel says to him, he said, “Just encouragement. Stay positive and keep working hard and things will fall in place.”

Hale said he didn’t have a JT bracelet — which were handed out by a football staffer — but wishes he did.

The Buckeyes open the season Sept. 3 at home against Akron.

Of greater concern for Ohio State, school officials go before the NCAA’s committee on infractions on Aug. 12. The university will propose that the penalties it has levied against itself — vacating the 2010 season, pushing Tressel out, the departure of three-year starting quarterback Terrelle Pryor and two years of probation — are enough to satisfy the college game’s rules police.

It was in the middle of January that Ohio State discovered Tressel had likely committed a major infraction when he did not disclose to his superiors or the NCAA that he had known for several months of possible improper benefits given to Pryor and other players. The incoming freshmen didn’t commit for another three weeks, but weren’t made aware of the brewing scandal.

Ron Tanner, a safety from Columbus, said it’s been hard to see what the program has gone through.

“As long as I’ve watched Ohio State football I’ve known Tressel to be the coach. I always looked forward to playing for him,” said Tanner, who went to the same school (Eastmoor) as two-time Heisman Trophy winner Archie Griffin.

Fickell, a defensive coach under Tressel, has been around the program for nine years and that has eased much of the players’ anxiety.

“I’ve grown and developed a relationship with him as well. So the transition is not too bad,” Tanner said. “We’re still looking to do great things in this program — no matter who the coach is.”

Curtis Grant, the top linebacker in the recruit class, said he did waver about his commitment when he learned of the troubles at Ohio State.

“I’m not going to lie; I did at first,” he said. “But I prayed about my situation. And at the end I felt this was still the best place for me.”

Braxton Miller, an acclaimed quarterback recruit, graduated from high school early to enroll in January. He immediately became a factor in the derby to become the Buckeyes’ starter, replacing Pryor who announced shortly after Tressel’s departure that he would give up his senior season for a shot at the NFL.

Miller said he doesn’t want to get ahead of himself by thinking of what it would be like to take that first snap for the Buckeyes.

“It’s a long learning process,” he said. “I’m taking it real slow. I’m not really focusing on that right now. I’m trying to get the plays down pat so if I do get in I’ll know what I’m doing.”

After winning at least a share of the last six Big Ten titles, the Buckeyes are not even favored to win one of the league’s newly formed divisions.

But the youngest Buckeyes don’t see trouble ahead.