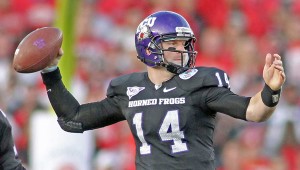 GEORGETOWN, Ky. — Cedric Benson lined up at running back for the first play during 11-on-11 drills, veered left after the snap and caught a dump-off pass from Andy Dalton.

Finally, the Bengals’ offense was back at full strength, though still not all on the same page.

Benson was still learning the playbook when he and the rest of the Bengals’ free agents lined up for the first time on Thursday night. A bunch of them were making up for lost time, including quarterbacks Jordan Palmer and Bruce Gradkowski.

“We have a new offensive coordinator, it’s a new playbook,” Benson said before practice. “I’m only one day in. So I’m just trying to catch up on everything. It always is a little overwhelming. As soon as I get this playbook down, the defensive guys had better be ready.”

Like other teams, the Bengals were short-handed while their signed free agents sat out the first four practices. They weren’t allowed to participate until the new collective bargaining agreement was signed on Thursday afternoon.

Owner Mike Brown indicated last week that he’d like Dalton to start, even though the second-round pick wasn’t able to work with coaches over the summer because of the NFL lockout. Dalton was the first quarterback during 11-on-11 drills Thursday night and took the overwhelming majority of snaps during a spirited practice.

“I felt like I had a good day,” Dalton said. “Having everybody back, everybody was excited out there.”

Gradkowski, signed as a free agent from Oakland, was the second quarterback. Palmer got by far the fewest plays of the three.

Gradkowski was in Tampa from 2008-09 with Jay Gruden, Cincinnati’s new offensive coordinator. Although he knows Gruden’s style, he’s still learning a playbook that’s much different than the one he had there.

“There’s a few similarities,” Gradkowski said. “Jay Gruden definitely has his own offense, his own style. There’s some things I remember, and there’s a lot of things that are different. So I’ve just got to come in and learn as much as I can and help this team any way I can.”

With a new quarterback this season — Carson Palmer says he’ll retire rather than return — there’s likely to be more emphasis on Benson, whose role changed last season as the Bengals put more emphasis on the pass. Benson was a free agent and likely would have left if the offense had stayed the same.

Gruden replaced Bob Bratkowski as offensive coordinator and told Benson that the running game will be important in his system.

Lewis sees him in a little different role in the new offense. Benson is known for his tough, up-the-middle running style. Lewis thinks that Benson, who caught only 28 passes last season, needs to be more of a receiver.

“What he needs to do is become a better receiver and do some of the other things that are going to be more important to us in our offense,” Lewis said Thursday before practice. “He has to be more diligent in the passing game: being in the right spots, getting the right route run, and getting it run correctly and precisely while having the speed and energy out of the cuts.”

Benson was arrested in July on a misdemeanor charge of assaulting his former roommate in Texas. He was arrested in the offseason last year as well, but Commissioner Roger Goodell didn’t punish him that time.

He’s wondering if he’ll be disciplined this time.

The Associated Press BEREA — No. 1 draft pick Phil Taylor made his much-awaited debut at the Cleveland Browns training... read more