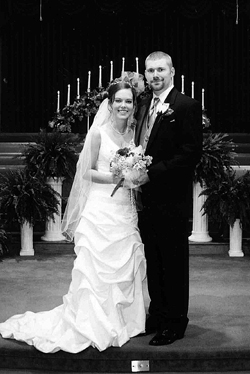 Kaylyn Elizabeth Haas and Kyle Benjamin Taylor were united in marriage on the afternoon of May 21, 2011, at Mamre Baptist Church in Kitts Hill. The ceremony was officiated by Pastor Ryan McKee and Pastor Eddie Neel. The bride was given in marriage by her father.

The bride is the daughter of Mark and Deanna Haas, of Ironton, and the granddaughter of Jack and Carol Lewis, Orville “Sonny” and Donna Haas and the late Justine Haas. The groom is the son of Benny and Terri Taylor of Aid, and the grandson of Tom and Judy Balmer and George and Patty Taylor.

In tradition, the bride wore something old, which was a pearl earring and necklace set that belonged to her great-grandmother, Pearl Payne; something new, which was her wedding gown with a “pick-up” skirt that extended into the train. Her white, two-layered veil was borrowed from Mary Ferguson, friend of the bride. Blue was throughout the wedding theme, as she carried a bouquet of flowers that included blue roses, lilacs and daisies.

After a honeymoon in Pigeon Forge, Tenn. the couple now reside in Aid.

Not Appomattox Court House. Not Blakely, Alabama. Since the fall of 1864, a Federal army had been on duty at... read more