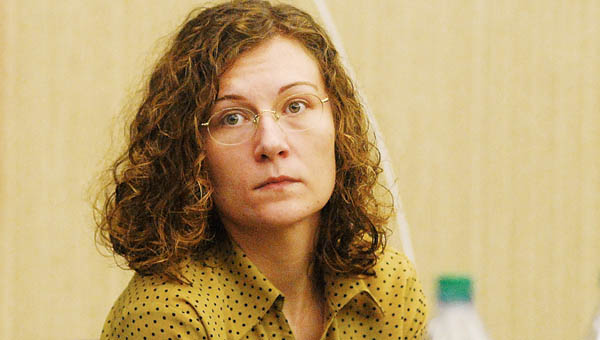 The prosecution rested its case against Megan Goff Friday morning, giving jurors a perhaps unexpected early start on the weekend.

Goff, 31, formerly of Hamilton Township, is accused of shooting and killing her estranged husband, Bill Goff, in 2006.

She was convicted the next spring but the Ohio Supreme Court later overturned her conviction and ordered a new trial. Goff contends she shot her estranged husband in self defense after years of abuse.

After Assistant Lawrence County Prosecutor Brigham Anderson called his final witness, defense co-counsel William Bluth asked visiting Judge Patrick McGrath to dismiss the indictment against Goff, saying, “There was no evidence presented by the state to indicate there was a planned or premeditated killing of any kind.”

Bluth said Megan Goff stated several times she went to her estranged husband’s house only to talk to him, not to shoot him. Ohio law, he said, requires some plan to have been in place showing intention.

But Anderson argued that evidence did support the claim Megan Goff had “prior calculation and design” when she went to her estranged husband’s home on the night of March 18, 2006.

“Look at what she said and did,” Anderson said. He detailed how Megan Goff, by her own statement, had a gun, obtained a second firearm and drove at a high rate of speed from Worthington, Ky., to get to Bill Goff’s residence. Once there, she parked at her father’s home under a carport where her vehicle would not be visible from the Goff residence. He told McGrath that Megan had told different things at different times to explain why she went.

“Her own statements, different statements, were that she went to talk and she went to get killed. Before his hand is off the door she shoots him 15 times,” Anderson said.

Bluth countered that the shooting was not immediate and that the couple had a conversation before the shooting began. Bluth said something that was said or done caused her to start shooting.

“Shooting somebody doesn’t mean you plan to shoot someone,” Bluth said. “The last time she was in that house there were 63 guns. She took a weapon to defend herself. All the evidence was she went there to talk to him.”

McGrath said there was evidence to support both views and denied the motion to dismiss the indictment. Before the recess for the weekend, Detective Aaron Bollinger testified under cross examination that he had found four guns and more than three boxes of ammunition for two or three different guns when he searched the Goff residence after the shooting.

“When you collected evidence, it’s on the (evidence) sheet, there’s quite a bit of ammunition in the house,” defense attorney Paula Brown said, showing Bollinger an evidence sheet.

Brown also asked about a bomb Bollinger was called to investigate at the Goff residence in January 2006 at the time of a domestic violence incident.

Bollinger described the item as a World War I or II-era mortar round that was found in an outbuilding behind the house.

“You were concerned,” Brown said. “You called in people with more experience.”

“I called the ATF (Bureau of Alcohol, Tobacco and Firearms),” Bollinger replied.

During her cross-examination, Brown also pointed out that the night of the shooting, an emergency medical services squad was called for Megan Goff.

“The squad was called because Megan was ill; she had a seizure,” Brown alleged.

“You were not aware she was on medication?” Brown asked.

Under re-direct examination, Bollinger told Anderson the mortar round, kept in an antique can in an outbuilding, was not “live.”

Bollinger told Anderson that the four guns found in the home after the shooting were not working and two were more collector’s items than actually operating firearms.

“One looks like an antique replica of an 1800s muzzle loader pistol from the days of Daniel Boone, where you have to pour powder into the gun,” Bollinger explained. “It was located in a storage closet upstairs in the master bedroom. The storage area was filled with all kinds of boxes, The antique colt firearm, it was like a 1900s revolver. It was in a box, with an old lead bullet. You’d have to use a firing cap and it requires powder. I found it in attic space storage amongst other property.”

The other two guns, found in a desk in the basement, were rusty, Bollinger said.

Also Friday, Dr. Bonita Ward, a forensics pathologist at the Franklin County Coroner’s Office in Columbus testified the autopsy on Bill Goff, performed two days after his death, took two days — most take an hour or so — because “he had so many wounds, it took longer to ID the wounds and where they were going,” she said. Ward said the cause of death was multiple wounds, some of them to vital organs.

The jury is now four women and eight men; one male juror was dismissed Thursday after he nodded off more than once during testimony. He was replaced with a female alternate.

Six-year-old Arnie Madden’s face lights up as he browses through the selection of backpacks at the Tools 4 School event... read more