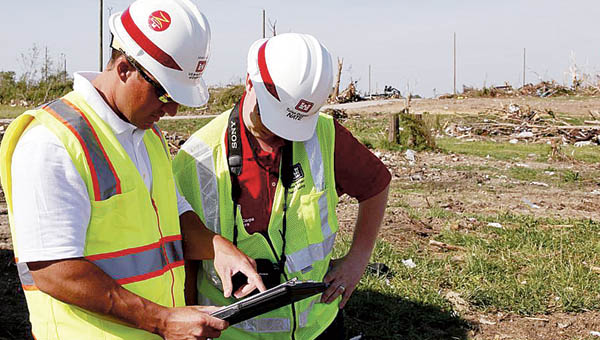 Two U.S. Army Corps of Engineer employees look over information as they help victims of the northern Alabama tornados that struck in May.

The scenes that met his eyes were not of the soft and subtle southern landscape, but one of uprooted trees and uprooted lives.

Gaskin is a member of the U.S. Army Corps of Engineers Temporary Housing Team, part of the Huntington District office. He was one of six people from the region who made the trip. Whenever there is a disaster, Gaskin’s group is usually one of the first called out to provide housing assistance. His job is to supervise the installation of FEMA mobile homes.

Where he went and what he saw

His work took him to the hard-hit areas of Franklin, Marion and Lawrence counties in Alabama, cities such as Phil Campbell and Hacklebury. Experts said an F-5 tornado struck the area he was called to lend assistance.

“It was like a war zone,” Gaskin said of the area when he first arrived. “It was hard to drive on the roads because there was not a lot of debris that had been cleaned up. So we had to dodge all the debris and trees down. There were trees uprooted, homes destroyed.”

The stories he heard as he went from family to family were emotional. Often he was met with outstretched arms by people who needed his help and were glad to get it.

“I met with one man in Phil Campbell. He was at work (when the tornados struck). He lost his wife and a son and another son was injured. The man was still in shock,” Gaskin said. “It was like it hadn’t really hit him yet.”

One older gentleman, Gaskin said, lost the home he shared with his handicapped son. Another elderly couple was unable to get out of their home in time and the woman was injured.

Gaskin was in Caruthersville, Mo., five years ago for tornado cleanup there. Although the cause of the damage was the same, Gaskin said northern Alabama seemed much harder hit.

“In Missouri the structures were still intact,” he said. “But in this area (northern Alabama) there was nothing left, no trees. It was amazing to see the difference.”

One of the first things he had to do was meet with victims and set up the FEMA mobile homes with utilities. Gaskin said he helped 25 families get temporary housing.

People are given mobile homes for 18 months. And the end of that time, they can purchase the home if they choose to do so.

Gaskin said in addition to the government groups, such as FEMA and the ACE, many churches around the country sent volunteers. Still, he said a lot of people are still living in tents and campers, waiting for someplace permanent to live.

Gaskin estimated it may be 5 or 10 years before the Alabama victims feel like their lives are back to normal.

But he has hope that the people of northern Alabama will rise above their tragedy and in the end, triumph.

“No matter how big the challenge is, you can overcome anything. Don’t be ashamed to ask for help,” Gaskin said.