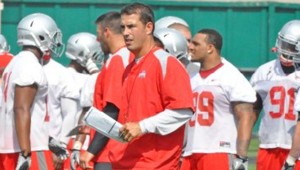 First-year head coach Luke Fickell walks among the Ohio State players as he conducts his first practice. Fickell took over as head coach when Jim Tressel resigned on May 30. The Ironton Tribune / COurtesy of Ohio State University Sports Information)

COLUMBUS — Luke Fickell had difficulty sleeping he was so wired about his first official practice as Ohio State’s interim head coach.

“It’s been a long time coming I guess you could say — a couple of months,” he said after Monday’s workout. “The biggest thing was the excitement that at about 2:30 in the morning you’re ready to go. Hopefully a bunch of guys felt that way.”

But he also knows it’s just another mile marker on what will likely be a long, strange journey for the Buckeyes this season.

“Will it be a little bit of relief just to get that first (practice) under your belt? Yeah. For everybody,” he said.

More than eight months after a memorabilia-for-cash scandal rocked the program, and several weeks after 10-year coach Jim Tressel’s forced resignation and Ohio State’s self-imposed sanctions, the Buckeyes finally got back to playing football on Monday.

Just over 100 players were on hand for the first practice in comfortable, 80-degree temperatures.

They have been faced with a mountain of changes since this past spring’s practices, let alone their last game — a 31-26 victory over Arkansas in the Sugar Bowl on Jan. 4.

Fickell, a defensive assistant under Tressel the last nine years, took over after Ohio State officials convinced Tressel to resign on May 30 in the midst of a lengthy NCAA investigation. Tressel has admitted he knew players had accepted improper benefits — money and discounted tattoos — from the owner of a Columbus tattoo parlor who was the subject of a federal drug-trafficking probe. But Tressel, with a record of 106-22, did not tell his superiors or the NCAA as required by his contract and NCAA bylaws.

Last December, five players were suspended for the first five games of the 2011 season. They included three-year starting quarterback Terrelle Pryor, who has since given up his senior season for a shot at playing in the NFL, along with starting wide receiver DeVier Posey, leading-rusher Daniel Herron, starting offensive lineman Mike Adams and backup defensive lineman Solomon Thomas. Another, linebacker Jordan Whiting, was suspended for just the first game. (A sixth player, linebacker Dorian Bell, has subsequently been suspended for the first five games but he is no longer with the team.)

Ohio State goes before the NCAA’s committee on infractions Friday. The university has vacated the 12-1 season in 2010, including the bowl win, in addition to self-imposing a two-year NCAA probation.

The committee can add to those sanctions with a bowl ban or by restricting Ohio State’s recruiting, or it can accept the penalties the university has proposed.

After months of unending scrutiny and a series of embarrassing revelations of possible violations, getting back on the field served as a tonic for Buckeyes fans and everyone on the team.

“It’s therapeutic for a lot of us— as much for the coaches as it is the players,” Fickell said.

The Buckeyes open the season on Sept. 3 at home against Akron.

Even in a typical year, this would be a chaotic month of practice. The Buckeyes must replace seven starters on defense and three on offense — and that doesn’t include those who will miss almost half of the season due to suspensions.

Fickell and his staff will be keeping a close watch on four candidates to replace Pryor. Joe Bauserman, a 25-year-old former minor-league baseball prospect who was Pryor’s backup last season, has the most experience. The best passer might be redshirt freshman Taylor Graham, the son of former Buckeyes signal-caller Kent Graham, who spent 11 years in the NFL. Perhaps the best athlete is sophomore Kenny Guiton, capable of moving the chains when running or passing. And the wild card is freshman Braxton Miller, an acclaimed recruit from suburban Dayton, given every chance during spring ball to take the job.

Of course, that was when Tressel was the head coach. But there have been no other substantial changes to the offensive staff and Fickell, a former defensive player in addition to coach, says he will rely on his offensive coaches’ decisions.

No matter, Fickell isn’t getting involved. He repeatedly declined to discuss individual players or positions, saying he preferred to focus on the whole team.

Of the situation at quarterback, he said, “We’re going to let it play out.”

CINCINNATI (AP) — Carlos Gonzalez got the perfect pitch on a night when home runs were the norm. Gonzalez hit... read more