Tressel made $21.7 million with Ohio State 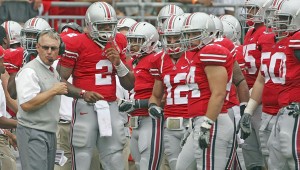 COLUMBUS — Jim Tressel made $21.7 million as Ohio State football coach over his decade-long tenure before being ousted for breaking NCAA rules, records from the publicly funded school show.

Tressel earned more than $3.5 million in 2010, the year he covered up an improper benefits scandal that has led to Ohio State being forced to appear before the NCAA’s committee on infractions this Friday.

The figures, released Tuesday to The Associated Press by Ohio State, show that almost a quarter of Tressel’s pay — $4.6 million — came from an exclusive deal under which Ohio State directed a portion of its exclusive deal with apparel-maker Nike to the coach.

During his career with the Buckeyes, Tressel was provided football game tickets valued at $104,800, more than $10,000 in Ohio State basketball tickets and over $21,000 in bowl tickets. His contracts also called for him to receive a $200,000 signing bonus in 2003, national-championship game bonuses worth a total of $835,000 (the Buckeyes played for the BCS title after the 2002, 2006 and 2007 regular seasons) and another $155,000 in bonuses for OSU players hitting certain academic standards.

Presidents of NCAA institutions are meeting this week in Indianapolis to discuss a number of issues, including expensive coaching contracts. Kansas State president Kirk Schultz wrote on Twitter that there were “lots of concerns” about the escalation of coaching salaries.

NCAA President Mark Emmert, however, was not as adamant about adjusting salaries as he was providing more scholarship money for athletes or simplifying the governing body’s expansive rule book.

Tressel’s lawyer, Gene Marsh, did not immediately respond to a request for comment.

Tressel’s contracts with Ohio State, like those of many of the top collegiate football coaches, were full of perks.

He was reimbursed almost $10,000 in 2008-09 for his membership and expenses at an exclusive local country club. Leased cars for the coach and his wife, Ellen, were valued at $23,000 for 2010-11. They also benefited from personal use of jets and charter flights amounting to just under $60,000 since 2005. In addition, the university paid for hundreds of dollars in cell-phone plans over his career.

Tressel was forced to resign on May 30 for failing to tell his bosses at Ohio State that he had learned players were trading memorabilia for cash and tattoos, breaking NCAA rules. Tressel was required under his contract and NCAA bylaws to alert his superiors to any rules violations by his athletes.

As a result, the Buckeyes have self-imposed penalties which include vacating last season’s 12-1 record plus the team’s share of the Big Ten title and going on two years of NCAA probation. The committee on infractions can accept those sanctions or can add other penalties such as bowl bans, fines and recruiting limitations.

Six players were suspended for the first five games of the upcoming season, although three-year starting quarterback Terrelle Pryor gave up his final year of eligibility for the chance to play in the NFL. Another player, linebacker Dorian Bell, is no longer with the team.

Former assistant coach Luke Fickell, selected to take Tressel’s place as interim head coach, is being paid around $700,000 — roughly $3 million less than Tressel made a year ago. He said on Tuesday that the money is not why he took the job.

“I’m not focused on that one bit,” he said. “I’ve never known what I’ve made since I probably started. You could talk to my wife if there’s any questions there. If they asked me to take this job and said they weren’t going to change your pay, we weren’t going to do anything different, I’d still do it. Maybe that sounds crazy, but that’s the way I feel about it.”

Initially suspended for two games and fined $250,000 by the university last March, Tressel’s final termination package released him from having to pay any of the fine. He also was allowed to keep his benefits package and was paid more than $54,000 of base salary for the month of June.

Gee, athletic director Gene Smith, Tressel and Fickell are among those expected to appear at the hearing on Friday in Indianapolis.

Asked at the end of the 2010 season if he was bothered that his head football coach was being paid so much, Gee said the coach’s salary reflected his value to the university.

The Associated Press CINCINNATI — Dontrelle Willis’ record could easily be 6-0 with a break or two. Troy Tulowitzki hit... read more