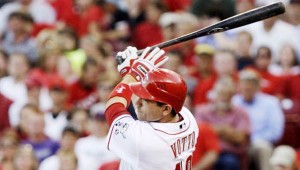 CINCINNATI — Three solo homers, four double plays and one very strange ending let the Reds come away with one of those shake-your-head wins.

The way the season has gone, nobody was complaining.

Joey Votto hit the last of Cincinnati’s three solo homers, spoiling Kevin Millwood’s return to the majors, and the Reds turned a season-high four double plays Wednesday night, holding on for a 3-2 victory over the Colorado Rockies that ended with a weird play.

Votto’s leadoff homer in the sixth inning snapped a 2-all tie and put the Reds in position for only their second win in their last seven games. Edgar Renteria and Jay Bruce also homered off the 36-year-old Millwood, who signed a contract before the game.

Mike Leake (10-7) gave up 11 hits in 7 1-3 innings, including Troy Tulowitzki’s solo homer, but managed to become the Reds’ first 10-game winner — with the help of a Rockies blunder at the end.

Colorado had a chance to tie in the ninth against Francisco Cordero. Eliezer Alfonzo doubled with one out, and pinch-runner Eric Young Jr. stole third. Young took off on contact when Dexter Fowler grounded back to the mound and was out in a rundown that allowed Fowler to get to second.

Fowler inexplicably took off on Chris Nelson’s soft grounder down the line toward third base. Todd Frazier had no play on Nelson, but grabbed the ball and tagged the sliding Fowler, preserving Cordero’s 21st save in 26 chances.

“I was hoping it would go foul, but it stayed fair,” Frazier said. “I saw him coming, grabbed it and put the tag down. I’m glad he called him out. It was bang-bang.

“I’ve never seen that before. That’s why I was smiling and laughing when I went into the dugout. I never saw that before.”

Rockies manager Jim Tracy didn’t have a problem with Young’s play — he was supposed to run on contact. Tracy didn’t understand why Fowler ran into the game-ending out.

“We made a base-running error with two outs,” Tracy said. “I don’t think there was going to be a play whatsoever at first base. The only play they had was to tag a runner going from second to third with two outs.”

The series opened with the Rockies getting the better of a game of home run derby. They hit four to Cincinnati’s three in a 10-7 win on Monday night, with 14 of the 17 total runs coming off homers.

This time, it was the Reds’ turn.

The Rockies signed Millwood to fill in for Juan Nicasio, who is out with a cracked bone in his neck stemming from a liner that struck him on Friday. Millwood spent this season playing in the minors for the Yankees and Red Sox, who released him last week.

Millwood went 4-16 with Baltimore last season, giving up a career-high 30 home runs. He wound up in a bad place for his return to the majors — Great American is one of baseball’s most homer friendly ballparks.

Millwood was doing fine until Renteria — one of the few players in Cincinnati’s lineup who knows him very well — led off the fourth inning with a homer. Renteria has a .326 career batting average off Millwood with three homers. One out later, Bruce hit his second homer of the series for a 2-0 lead.

The trend continued when Votto led off the sixth with an opposite-field drive off a full-count pitch. It was Cincinnati’s fourth hit of the game, three of them solo shots. Millwood gave up six hits overall in seven innings, striking out six while throwing 100 pitches.

The 11 hits off Leake were a season high, but nine of them were singles. Cincinnati’s defense scuttled rallies by turning double plays in the second, fourth, fifth and seventh innings. Fowler singled home a run in the fifth, and Tulowitzki tied it at 2 when he led off the sixth with his 23rd homer.

Tulowitzki also singled, extending his one-week hitting surge. The shortstop has hit safely in his last eight, with six multihit games. He’s 16 for 29 with three homers and four doubles during the streak.

NOTES: The Rockies put RH reliever Matt Lindstrom on the 15-day DL and called up RHP Edgar Gonzalez from Triple-A. They also optioned INF Ian Stewart to the minors. … RHP Jhoulys Chacin makes his second career start against the Reds in the finale of the four-game series Thursday afternoon. He beat them on Sept. 7 at Coors Field. … Reds RHP Johnny Cueto will try to rebound from his shortest start of the season, only 3 2-3 innings in an 11-4 loss in Chicago on Saturday. … The Rockies have never swept a four-game series in Cincinnati.