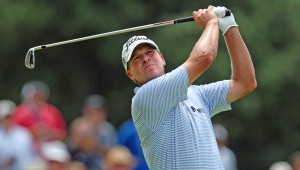 Steve Stricker follows through on his tee shot on No. 4 during the first round of the 93rd PGA Championship at the Atlanta Athletic Club in Johns Creek, Georgia, on Thursday. Stricker fired a 63 on the day. (The Ironton Tribune / MCT Direct Photos)

JOHNS CREEK, Ga. (AP) — Steve Stricker stood a mere 10 feet away from the lowest round ever in a major, a captivating moment at any other championship.

Not with U.S. Open champion Rory McIlroy, the favorite at this PGA, trying to blast a 7-iron through a tree root. He injured his wrist so badly that he thought of quitting, yet somehow managed an even-par 70 despite not being able to hang onto the club with both hands.

And not with Tiger Woods looking like a 14-time major champion for five holes, only to finish 14 shots out of the lead after stumbling through the sand and posting a 77, his second-worst score ever in a major.

Already a memorable year in the majors, it looks like the PGA Championship wants a piece of the action.

On a sweat-stained Thursday at Atlanta Athletic Club, Stricker became the 11th player in PGA Championship history to shoot 63. He opened with three straight birdies and kept right on going until he stood on the cusp of history without even knowing it.

Only after his birdie putt for 62 slid by the cup did his caddie, Jimmy Johnson, tell him that it was for the record in a major.

“It never really registered,” Stricker said. “I was just trying to make a birdie and finish 8 under, and I really was concentrating on the putt, but never thought about the history part of it.”

He never thought he could be atop the leaderboard, either. After three days of practice on the 7,467-yard course — the longest par 70 ever at a major — Stricker didn’t have a good feeling about his chances.

His money would have been on his Wisconsin neighbor, Jerry Kelly, and he wasn’t too far off.

Kelly had a career-best 65 in the PGA Championship and was two shots behind. Completing the American foursome atop the leaderboard was former PGA champion Shaun Micheel at 66, and Scott Verplank with a 67, perhaps the biggest surprise of the day because Verplank has been battling a wrist injury.

For the longest time, it looked as though he would have company in physical therapy.

The 22-year-old McIlroy showed his age, if not his fearless style, by taking a shot out of the left rough on the third hole, even though his ball sat squarely behind a 2-inch wide tree root. He let the club fly from his hands on contact, but it was too late.

The ball only went about 20 yards behind more trees, and McIlroy immediately began shaking his right hand. Before long, he noticed swelling by the wrist, and a throbbing that stretched all the day up to his shoulder.

“It was dangerous,” McIlroy conceded. “In hindsight, it would have been better to chip out sideways. I still made 5. Yeah, it was a shot that I felt like, if I took it on and pulled it off, it could have saved me a shot.”

It nearly cost him the rest of the week.

McIlroy put an ice compress on his wrist, then summoned a physical therapist. He thought about withdrawing, but pressed on, flinching and flexing his wrist and making just enough putts for a remarkable round of 70.

He was scheduled for tests Thursday night, but felt confident about playing the second round if he could be assured he couldn’t do anything to make it worse.

The only injury to Woods was to his psyche.

He was 3 under through five holes, including a 5-wood from pine straw over a mound and under a tree that set up birdie on the par-5 12th hole. But after a 4-iron into the water on the par-3 15th, he came undone.

Woods made three double bogeys over the next 10 holes, and wound up in a dozen bunkers. One last bogey gave him his second-highest score in a major, behind the 81 he shot at Muirfield in the 2002 British Open when it was wet and windy. This day was simply steamy, which described Woods’ mood after a round that got away.

“I’m not down,” he said. “I’m really angry right now. There’s a lot of words I could use beyond that.”

He attributed the shocking turnaround to ditching mechanics and trying to play as though his swing changes were coming naturally. A 13-hole train wreck showed otherwise.

“Got off to a great start today, was 3 under early, was having mechanical thoughts through those holes … and I thought, ’I can let it go’ and play by instinct and feel,” he said. “And it just screwed up my whole round. I’m not at that point where I can do that yet.”

For being such a long course, it didn’t feel that way. The PGA of America moved up several tees, and temperatures in the 90s enabled the ball to travel even farther.

Stricker led 22 players who broke par, although Atlanta Athletic Club doled out its share of punishment. No one suffered quite like Ryo Ishikawa, the 19-year-old from Japan who was coming off his best finish in America last week at Firestone, where he tied for fourth. He had a career-high 85, with six balls in the water.

Luke Donald, No. 1 in the world, opened with a 70, while second-ranked Lee Westwood began his quest for his first major at 71. McIlroy played in the traditional grouping of the year’s major champions, with Masters champion Charl Schwartzel opening with a 71 despite a double bogey on the last hole, and British Open champion Darren Clarke at 78.

Stricker, the highest-ranked American at No. 5 in the world, had only 24 putts on greens that are remarkably smooth. At least most of them were, anyway.

If the opening round wasn’t bizarre enough, the mowers malfunctioned Wednesday night and tore up chunks of turf on the edges of the 14th and 17th greens. They were patched well enough to play, yet they are considered ground under repair for the rest of the week.

It was no more than a slight tear on a prom dress for a course that combines a little of the beauty and elevation found two hours away at Augusta National, and the narrow fairways and Bermuda rough near downtown Atlanta at East Lake.

Stricker already has won twice this year and feels as though he has nothing left to prove, especially after he came back from a slump and made history by being voted PGA Tour comeback player of the year — in consecutive seasons.

A major championship would be the topper.

“It would be great,” he said. “If I don’t win it, it’s not going to change who I am or what kind of player I’ve been. I guess I accomplished what I set out to accomplish six years ago, to get back in the winner’s circle, to play well again. All this other stuff is really just icing on the cake, and that’s the way I treat it.”

As for a 63, the 25th time someone has posted that score in a major?

“I wish I would have been able to make that putt to be one better than that group of guys,” he said. “But 63 is a heck of a start, and I’m happy to get off to that start.”

COLUMBUS (AP) — There are tall ones, fast ones, strong-armed ones, an old one and a young one. Ohio State’s... read more