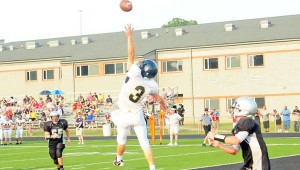 COAL GROVE — Finally, it was time to take a look.

The long wait from the end of last football season to the new year ended Saturday night at the annual Ohio Valley Conference preview.

Not only did the teams make their debut in game uniforms, but Chesapeake’s Andy Clark did a cameo before his official debut as the Panthers’ new head coach.

Clark — a former Chesapeake quarterback and assistant coach — took over for Phil Davis who retired. He said it has been a smooth transition.

“Coach Davis let me do a lot of stuff during practice to prepare me,” said Clark. “And the other assistant coaches have made it pretty easy on me.”

Teams play two quarters in the preview and coaches try to get most of their players in the game to get a glimpse of what they might be capable of doing when the season begins for real.

Like most teams, South Point has two scrimmages but coach Doug Shilot said the preview is still important.

“We look at it as a time to improve. We’re learning every time out,” said Shilot.

The weather took over late as lightning forced the final game to end early.

Teams will play Jamboree games next weekend. Teams are permitted to charge admission for the scrimmage if they pay a fee to the Ohio High School Athletic Association.

The Associated Press INDIANAPOLIS — Ohio State’s hearing before the NCAA took only four hours. Now it must wait up... read more