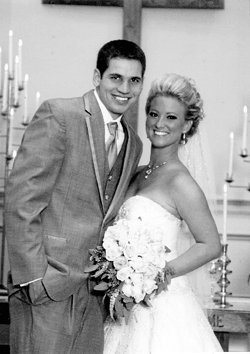 Hannah Leigh Ray and Jonathan Jay Leavitt were united in marriage on Jan. 11, 2011, at 6:30 p.m. at Grace United Methodist Church in Raceland, Ky.

The groom is the son of Rebecca Mattingly of Ashland and the late Clarence Leavitt. Maternal grandparents are the late Justin and Grace Mattingly of Flatwoods.

The bride was given in marriage by her father.

Flower girls were Lydia Pack and Riley Daniels, of Ironton.

Ring bearers were Gavin Pack, Derek Pack and Zayne Williams, all of Ironton.

John Daren Rowsey, of Flatwoods, was the soloist.

A reception followed at the Bellefonte Country Club.

Mrs. Leavitt is a 2005 graduate of Ironton High School. She is beginning her first year of RN nursing school at Ashland Community Technical College.

Mr. Leavitt, a 2005 graduate of Rose Hill Christian High School, is the owner/operator of LSW Tree and Lawn Service in Ashland.

The couple honeymooned at the Greenbrier in White Sulphur Springs. W.Va. and now reside in Ashland.