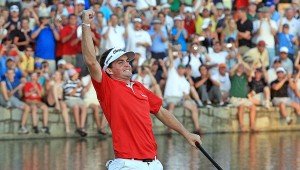 Keegan Bradley celebrates on the 18th green after winning the PGA Championship at the Atlanta Athletic Club in Johns Creek, Georgia, on Sunday. (The Ironton Tribune / MCT Direct)

JOHNS CREEK, Ga. — A rally that ranks among the best. A collapse hardly anyone saw coming. There was even a guy in a red shirt Sunday, pumping his fists with each clutch putt in the final, frenzied hour of the PGA Championship.

In a major filled with unfamiliar names, Keegan Bradley delivered an unforgettable finish.

Bradley was five shots behind with only three holes to play after his chip shot raced across the 15th green and into the water, leading to a triple bogey. That’s when he reminded himself that no lead was safe on the final four holes at Atlanta Athletic Club.

Instead, it led to one of the most stunning turnarounds in a major. Bradley made back-to-back birdies, including a 35-footer with a belly putter that rattled into the cup on the 17th.

Then came a monumental meltdown by Jason Dufner. Unflappable all afternoon, he hit his tee shot in the water on the 15th for the first of three straight bogeys that led to a three-hole playoff.

Bradley birdied the 16th hole in the playoff — his first outright lead of the day — and went on to win by one shot.

The son of a PGA professional in Vermont, wearing red for his alma mater — St. John’s — Bradley became only the first player in at least 100 years to win a major championship in his first try.

The Wanamaker at his side, Bradley took out his cell phone and took a picture of the largest press audience he had ever seen.

“It feels unbelievable,” he said. “It seems like a dream and I’m afraid I’m going to wake up here in the next five minutes and it’s not going to be real.”

The final major of the year was hard to believe in so many ways.

It was Bradley, a 25-year-old PGA Tour rookie who was ranked No. 108 in the world, who ended America’s longest drought in a major that had reached six. He became only the third player in at least 100 years to win a major on his first try.

All this after Tiger Woods missed the cut and finished out of the top 100 for the first time in a major, and U.S. Open champion Rory McIlroy — the favorite at the PGA — hit a tree root in the opening round and played the rest of the week with his right wrist heavily taped. He tied for 64th and finished 19 shots behind.

Then came the finish — a rousing rally for Bradley, a sad collapse for Dufner. It brought back memories of Ed Sneed making bogey on the last three holes of the 1979 Masters, and even Arnold Palmer losing a seven-shot lead with nine holes left in the 1966 U.S. Open.

Dufner played that four-hole finish in 3 under for the week — never once making a bogey — until the final round.

Sunday was different. He made three bogeys in regulation, another on the 17th in the playoff to fall two shots behind, and a birdie on the last hole in the playoff only made the score seem closer than it was. Dufner, now winless in 148 starts, closed with a 69.

Bradley, best known until now as the nephew of LPGA great Pat Bradley, moved to No. 29 in the world. He won earlier this year at the Byron Nelson Championship in a playoff, again after the leader faded on the closing holes.

The win makes it seven straight majors by players who had never before captured a Grand Slam event, the longest streak ever.

Bradley, who became the first major champion to use a long putter, can only hope more will follow.

“I don’t want to be one of the guys that kind of disappears,” Bradley said. “I would love to be up in a category with the best players and be mentioned with Phil Mickelson, one of my idols. I hope I don’t disappear. I don’t plan to.”

Mickelson had been the last American to win a major at the 2010 Masters, and perhaps it was only fitting that one of his proteges ended the drought. Mickelson has been playing money games during practice rounds at the big tournaments with Bradley, wanting him to be prepared to play for something more prestigious than cash. The kid must have taken the lessons to heart.

He never gave up when he had every reason to do just that.

“This guy’s the guttiest player I’ve ever worked for,” said his caddie, Steven “Pepsi” Hale. “There’s no quit.”

Bradley was two shots behind when he arrived at the pivotal stretch of the course. From left of the 15th green, he hit an aggressive chip that came out too hot and rolled into the water, leading to a triple bogey.

Dufner watched it all unfold from high on the hill as he waited on the 15th tee, his lead suddenly up to four shots over Anders Hansen, who was in the process of making bogey. For the first time all day, Dufner showed a trace of emotion, wincing slightly when he saw the flight of his tee shot take the ball into the water right of the green.

He still poured in a 12-foot putt to at least escape with bogey. His lead was still four shots, and when he split the middle of the 16th fairway, he seemed to be on his way.

Then came an unlikely chain of events.

Bradley stuffed his shot into 8 feet for birdie on the 16th. Behind him in the final group, Dufner hit into the right bunker, blasted out to 10 feet and made bogey. Now his lead was down to two shots.

Dufner arrived on the 17th tee in time to watch as Bradley rattled in a 35-foot putt, pumping his fists as his caddie stood behind the hole holding the flag over his head with both arms. Dufner did well to find the middle of the green for what appeared to be a safe two-putt par. But he ran his first putt 10 feet by the hole and three-putted for bogey.

With the pressure as great as it had been all day, both played the 18th the same way — dry. Both had long two-putts for par from one side of the green to the other. They finished at 8-under 272.

Dufner’s 5-iron on the opening hole of the playoff — the uphill 16th — came within an inch of hitting the hole and stopped 6 feet away. Bradley answered with a shot into 4 feet and made the birdie, while Dufner missed his putt.

On the 17th, Dufner again three-putted for bogey to give Bradley a two-shot lead going to the 18th. The final drama for Bradley was watching his 6-iron descend toward the green, clearing the lake with not much room to spare. Dufner rolled in a birdie, but by then it was too late to recover from his mistakes.

“I’m so new at this situation, I don’t know if I appreciate it as much as I will — soon,” Dufner said. “I might look back in 10 or 15 years and be disappointed if I never get another chance.”

The group tied for fourth included 2001 champion David Toms (67) and two others who stayed in the game until the very end.

Robert Karlsson got within one shot of the lead with a 5-foot eagle putt on the 12th hole. The Swede never made another birdie, though, and finished with three straight bogeys for a 67. Scott Verplank holed out a bunker shot on the 16th and was tied with Bradley going to the 17th, but his tee shot bounced off the wall and into the water for a double bogey. He closed with a 70.

The Associated Press CINCINNATI — Dontrelle Willis couldn’t get his forearm to loosen up during his pregame warmup. It got... read more