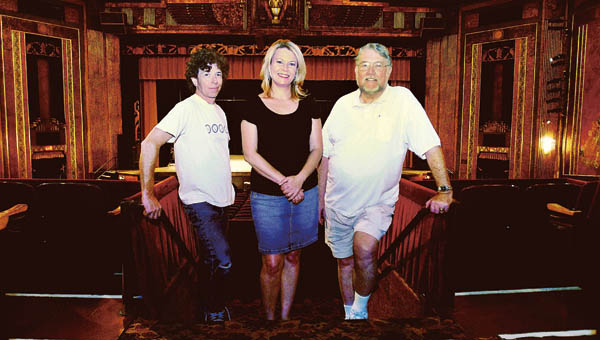 ASHLAND, Ky. — Jack Gallaher was in high school when the Paramount Arts Center became his home away from home.

Back then in the 1950s, the PAC was a movie house showing first-run films and was a favorite hangout for teens wanting to earn some pin money as an usher or ticket taker.

“We started in high school as a whim and had a lot of fun,” Gallaher said.

Today, the PAC has been transformed into a Tri-State performing arts center playing host to Broadway shows, classical symphonies and such country icons as Loretta Lynn and Merle Haggard.

Now the Ashland businessman and inveterate volunteer has joined with 40 other community-minded citizens to plan a special celebration in honor of the Paramount as the grand old girl of entertainment turns the big 8-0 in September.

Coordinating the community birthday party is Christy Reaves, who took over the job of development director at the Paramount in May.

“I was already thinking about the 80th anniversary,” Reaves said. “I mentioned it to my boss a couple of times. Perhaps she decided the only way to get me to shut up was to have a party.”

That’s when Reaves reached out to the Tri-State to get volunteers to turn into reality what she envisioned as a daylong extravaganza.

“For the 80th birthday, I knew I wanted the community at large who feel the Paramount’s importance help plan this party,” she said. “Each has his or her own love of the Paramount and reasons to come in and celebrate. People who have come on board have taken larger roles. It will be a lot of fun.”

And it’s a party in capital letters that Reaves and her committee have come up with. A day of celebration from a vintage style show to guided tours of the historic structure to Commedia Dell’Arte performances to two performances of the shows the original moviegoers saw when the theater opened in 1981.

Reaves was just under 3 when she came into the Paramount for the first time as it was winding down its run as a movie house.

“I thought how huge this place was,” she said. “My mother is a very nostalgic woman and must have known the theater was closing and wanted me to experience a movie here.”

As part of the celebration Reaves wants everyone who has a special memory of the Paramount to share it either through letters to the editor or writing it down in the four memory books that will be set up in the lobby during the party.

“We want people to come to these books and tell us why they love this place, tell their favorite memory,” she said.

Gallaher understands the value of keeping PAC memories intact and for future generations to cherish. He has many that he treasures and a couple or two he can now laugh about. Like the time Gallaher was an usher and the 1951 musical classic “Showboat,” starring Howard Keel and Ava Gardner, proved so popular with Ashland audiences the theater held it over for 30 days.

“I thought I would die,” he said. “I could probably sing every song and dance every dance and knew the dialogue.”

But then he recalls the times he was on the Paramount stage as an actor with the Ashland Little Theater group or the countless shows he seen as one of the theater’s first chair holders.

“So many memories and so many fine folks who have come through here,” he said.

Almost $200,000 in funding has been sought to conduct safety studies on roadways in the county. The funding is available... read more