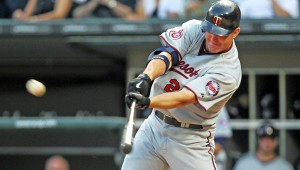 DETROIT (AP) — Jim Thome’s back was aching, his toe was throbbing and his quad was cramping, turning his pursuit of 600 home runs into a painful endeavor that made him wonder if he would even reach the milestone before season’s end.

On Monday night, Thome finally harnessed the power again in that pure left-handed swing of his, sending two home runs sailing over the fence at spacious Comerica Park. When No. 600 disappeared over left fielder Delmon Young’s head in the seventh inning, Thome raised his right fist while rounding first base.

His quiet chase, which seemed to vanish from baseball’s consciousness as injuries slowed him down, was finally complete.

“You dream about it but when it finally happens it’s kind of surreal,” Thome said. “It’s a neat thing, it really is.”

The 40-year-old Thome became the eighth player to reach 600, hitting a two-run homer in the sixth inning for No. 599, then a three-run shot in the seventh. The milestone came on a 2-1 pitch from Daniel Schlereth.

Both homers were hit to the opposite field. When No. 600 went over the fence, the crowd in Detroit came to its feet to applaud Thome. Only Babe Ruth needed fewer at-bats to reach 600, doing so in 6,921. Thome’s milestone came in No. 8,167.

Thome’s 65 home runs against Detroit are his most against any team.

The Tigers posted a congratulatory message on the scoreboard after Thome’s homer, and the Twins came out to greet him at home plate.

Fighting injuries during a frustrating season in Minnesota, Thome hasn’t received nearly the amount of national publicity that his predecessors who reached the milestone did. Even Derek Jeter’s accomplishment of 3,000 hits earlier this season dwarfed the attention Thome has been getting for a chase that’s far more rare.

“Welcome to the club,” Mays said in a video shown on the Twins’ television broadcast.

Griffey, who briefly played with Thome on the Chicago White Sox in 2008, later released a statement congratulating him.

“It is an honor and a privilege to welcome another member to the 600-home run club, especially someone like Jim Thome, who is not just a great baseball player, but a great person as well,” Griffey said. “While it was only for a short period of time, I was glad to have the honor of being his teammate. I offer Jim my heartfelt congratulations.”

Unlike Bonds and Rodriguez, Thome has largely eluded suspicion of using performance-enhancing drugs. His country-strong physique was never chiseled like some of the hulking sluggers who proliferated his generation.

From the moment he belted his first homer — off Steve Farr on Oct. 4, 1991 — to the big one on Monday night, Thome has always seemed like a natural.

It was perhaps fitting that Thome reached No. 600 in a matchup of AL Central rivals. He hit 334 home runs with Cleveland and 134 with the White Sox.

As he rounded the bases, his teammates poured onto the field and his family, including his father, wife and children, met him at home plate.

“I thought of my mother,” Thome said. “She must’ve been looking down upon us, and being there with us. I know she’s here in heart and spirit.”

Thome is the oldest person to hit his 600th homer. Sosa previously held that mark at 38 years, 220 days. He reached the milestone in 2007.

Since signing with the Twins before last season, Thome has been a popular figure at Target Field — both in the clubhouse and for the paying customers in the seats. He hit 25 home runs last season in just 276 at-bats, many of them moon shots that sailed high into the Minneapolis air and caused players, coaches, fans and everyone else to shake their head in amusement and astonishment.

With a down-home demeanor and an uncanny ability for hitting home runs in a ballpark that has proven too big for most hitters, it hasn’t taken long for Thome to reach heightened status in the Twin Cities. He dressed up as Paul Bunyan and led Babe the Blue Ox by a leash for a television commercial, and the lumberjack shirt with his No. 25 on the back is a hot item at the park.

This season has been more of a struggle. He’s been bothered by injuries to his toe, oblique and quadriceps. His milestone homer was only his 11th of the year in his 185th at-bat, and he admitted on Monday night that he was wondering if it was ever going to happen.

“To get it over with, what a sigh of relief,” he said. “You work so hard — obviously fought through some injuries all year long.”

But when healthy, he’s still as capable as anyone of putting a powerful swing on the ball.

After a lineout and a single in his first two at-bats, Thome lifted a drive to left-center off Rick Porcello in the sixth, breaking a 3-all tie. That homer went an estimated 412 feet. His 600th was shorter. For a moment, it appeared Young might have a chance to make a play on the ball, but Young — who was traded from the Twins to the Tigers earlier in the day — could only watch as his former teammate’s hit disappeared over his head.

Before Monday’s game, Thome hadn’t homered since Aug. 4. Thome has hit at least 20 homers in 17 of his last 18 seasons — the only exception was 2005 when he hit seven in only 59 games for the Philadelphia Phillies.

He revived his career with the White Sox after that, homering 42 times in 2006.